Excitement grows over return of The Charly Boy Show

Hours after Charly Boy reached an agreement with the management of Ogelle, Africa’s first user generated content (UGC) video-sharing platform for African content only, to bring back The Charly Boy Show, the iconic Nigerian singer/songwriter, television presenter, publisher, and producer has started creating a buzz around the show to feel the pulse of the audience.

“How many of you want to see the return of the CHARLYBOY SHOW?” Charly Boy tweeted on April 26 via his verified handle @AreaFada1.

“What would you expect this time around? Your contributions are very important. Waiting for your feedback,” he tweeted, with a picture showing him and Osita Oparaugo, founder of Ogelle, hours after the duo signed an agreement to bring back The Charly Boy for exclusive showing on Ogelle.com. 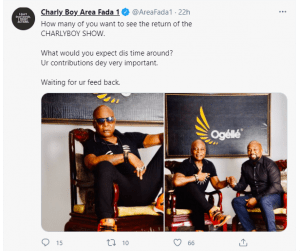 Fans who have sorely missed the show which featured music, comedy, celebrity appearances, and sometimes politics have been showing their eagerness to have The Charly Boy Show back, with many dropping comments on how they would like the new show to be.

“I would love to have the show back, but with modernization. Different segments which should have a celebrity one-on-one talk. Talent hunt and music,” replied Ebere via @Eberewuz.

Another Twitter user, @Onyiax9, said he would love to hear Charly Boy’s views on “platforms” in terms of “conducive environment for art as regards youth empowerment”.

“Because these days people get arrested for dress codes and tattoos as well. Expression as a whole is a whole topic,” @Onyiax9 said.

Tweeting via @EgbuhuzoIfeany1, Egbuhuzo Bishop said he would love to see “the power couple Tunde and Wunmi Obe”.

Adeyemi Adejo (@adeyemi82059326) also said he would want to see the return of Candid camera.

But Felix Lawson (@CrasFelix) expressed concern that the government of the day may come down hard on any programme involving Charly Boy if it is airing on TV.

“Charly Boy, you are an artist and an activist. The government through the NBC would close down TV stations that would air your programme. Buhari is on the throne and doesn’t like activists. Except say na YouTube things,” he tweeted.

Recall that Charly Boy (Charles Chukwuemeka Oputa) and the management of Ogelle on Monday reached an agreement to bring back The Charly Boy Show.

The show, which will air exclusively on Ogelle.com beginning in May, promises to be the hub of entertainment.

But beyond entertainment, Charly Boy said through the show the young will also pick up lessons that will be valuable in their various endeavours.

“This is why we are bringing back The Charly Boy Show – to entertain, but also to teach through entertainment. We need to revive the African values of family, brotherhood, success through hard work, consistency in any chosen field, and so on,” Charly Boy said.

I am indebted to Nigerians- Buhari