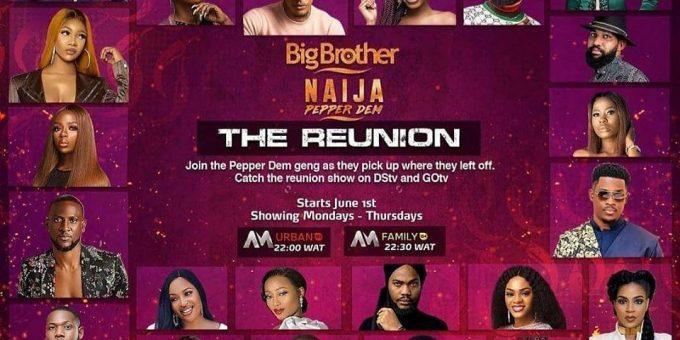 Fans of the popular reality TV show will be treated to the most epic reunion show yet that promises to be filled with emotional outbursts, wild surprises and other OMG moments served by the Bbnaija Pepper Dem gang. The show will also let viewers in on the lives of the Bbnaija alumni seven months after the show’s finale.

This is no spoiler alert but there will be laughter, tears and confrontations as the ex-housemates along with Ebuka Obi-uchendu, the show’s host, revisit the events that rocked Biggie’s house last season. Fans and viewers will also hope to get answers to some burning questions and perhaps witness the end to the rivalries between some of the ex-housemates.

The Big Brother Naija Pepper Dem Reunion will premiere Monday, 1 June and will air Mondays through to Thursdays on Africa Magic Urban at 10pm WAT and Africa Magic Family at 10:30pm WAT, available to customers on Dstv Premium, Compact Plus, Compact, Confam, Yanga and Gotv Max and Jolli.

Meanwhile, auditions for Bbnaija season 5 is still on. Interested participants can log on to www.africamagic. tv/bbaudition to fill out the online registration form and upload a 2-minute video of themselves stating why they should be picked to be a Housemate in the upcoming season. The online audition is free and open to interested male and female participants, who are of Nigerian nationality with a valid Nigerian passport, and must be 21 years of age by June 1, 2020.