Nigeria spent N125bn on pipeline repairs in one year

Between August 2017 and August 2018, Nigeria spent N125billion repairs and maintenance of leaking pipelines carrying crude oil from wells to flow stations in the Niger Delta, where more than 90 percent of the country’s crude is produced.

In Nigeria, petroleum and associated products are transported through extensive network of pipelines that run across different locations throughout the country from remote to populated areas.

These pipelines are however, poorly secured, thereby making them targets of repetitive attacks by vandals and this has cut the country’s revenue from oil and gas by half.

According to September report from the Nigeria National Petroleum Corporation (NNPC) from August 2017 till December 2017 Nigeria incurred a huge cost of N47 bilion maintaining and repairing its oil pipelines while within the first quarter( January to March) of 2018 another N25 billion on keeping its old pipelines actives.

In the second quarter (April, May June) of 2018, Africa biggest economy spent N35 billion on pipelines maintenance cost while in July and August another N5.4 billion an N8 billion was spend respectively. 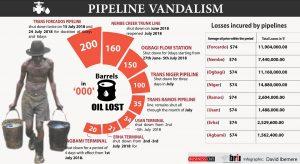 Ademola Henry team leader at the Facility for Oil Sector Transformation (FOSTER) questioned why government is still deciding to operate pipelines when the cost centers are too high.

“Anytime NNPC can’t find anywhere to hide expenses that they have incurred they just recorded them as loses under pipeline repairs which is very sad,” Henry said by phone.

He advised that the federal government should “deregulate the sector and commercialize the pipelines and allow it operate on a tariff model which will further block leakages.”

“The allegation in the industry now is that the biggest beneficiaries of pipeline vandalism are the Military’s Joint Task force, which is very sad,” Henry concluded.

Despite the huge amount of money spent on pipeline maintenance, NNPC report also revealed the country recorded a total of 1,883 pipelines breaks within September 2017 and September 2018.

Ayodele Oni, energy lawyer and partner at Bloomfield law practice said the problem of pipeline vandalism is broad. “When you have problem surrounding unemployment, corruption, poverty, neglect and lack of social infrastructure this is what you get.”

“Government needs to give the locals a sense of belongings like job opportunities, education, and infrastructure and stop giving money to local chiefs,” Oni said.

Nigeria is too dependent on pipelines, says Oni, “Therefore we need to develop our transport system for easy movement of crude oil for example explore the opportunities in the rail system which is what other countries are doing.”

Statistics from the latest audit report of the Nigeria Extractive Industries Transparency Initiative, (NEITI) Nigeria recorded the highest crude oil loss in the last 18 years with an average of 245 million barrels of oil going down the drain in 2016.

UAE, Nigeria: A game of ‘Ping-Pong’

Nigeria will overtake China as the second most populous country. How prepared is it?