Global economic growth projected to decline to 3.2% in 2022 — World Bank

The World Bank has said that global economic growth is expected to decline by 3.2 percent this year, compared to 6.1 percent in 2021.

The bank linked the fall in growth to rising food and energy prices caused by Russia’s invasion of Ukraine. An event that has led to spikes in inflation in many nations. The US and UK inflation figures rose to their highest in more than ten years. The US Bureau of Labor Statistics said that inflation is at a forty-year high of 9.1 percent, while in the UK, inflation is at 9.4 percent.

Emerging markets, on the other hand, have experienced an even worse situation, resulting in civil unrest in Sierra Leone, Ghana, Tunisia, and a few others.

With food and energy prices getting out of the reach of the majority of the population–Nigeria, Ghana, Angola, Egypt, Lebanon, and Argentina posted inflation figures of 19.74 percent, 31.7 percent, 21.4 percent, 19.8 percent, 210.08 percent, and 71 percent, respectively. 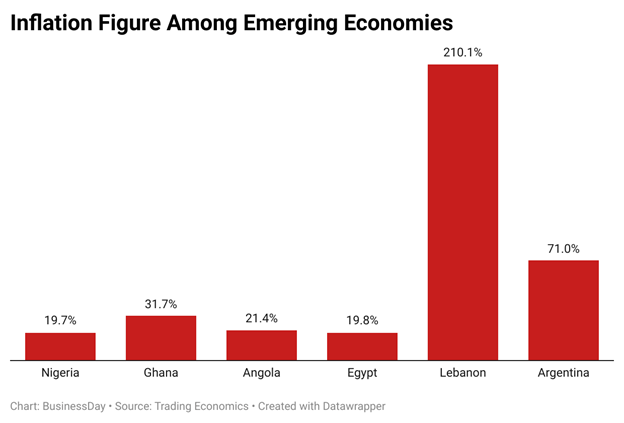 Apparently, it signifies the twin impact of a tighter monetary policy occasioned by higher interest projections in the US.

Perhaps fears about a further decline were worsened following the re-emerged COVID-19 scare and the real estate crisis in China. A recent Fitch investigation stated that “a recent mortgage strike could diminish confidence in the property market, delaying a recovery and causing ripple effects throughout the domestic economy”.

The fact remains that the property market crisis alone could cause China’s banks a loss of over US$350 billion, according to Bloomberg.

Despite negative news coming from the already stressed property market, a return to factories in Beijing, Wuhan, and Shanghai shows that production is gradually getting back to the pre-COVID-19 lockdown period.

Another event, the bank pointed out, is the stress the rising cost of debt servicing could have on emerging markets. With Sri Lanka, Tunisia, Egypt, and a few others seeking bailouts from the International Monetary Fund (IMF), global growth projections would be negatively impacted by some of these countries’ inability to service their debt.

Events in Europe are also critical as the war in Ukraine rages on. “The war in Ukraine could lead to a sudden stop of European gas imports from Russia; inflation could be harder to bring down than anticipated either if labour markets are tighter than expected or inflation expectations are unanchored,” the bank said.

The bank made some recommendations. First on the list was that countries should direct all their energies toward controlling inflation through interest rate increases. “Taming inflation should be the first priority for policymakers,” the bank said.

It acknowledged that raising interest rates would create some inconvenience, but its gains would help to stabilize the global economy and return it to growth.

“Tighter monetary policy will inevitably have real economic costs, but delay will only exacerbate them,” it said.

In addition to the need to raise interest rates as a weapon to fight inflation, the bank advised that raising taxes or lowering government spending should be directed towards helping the most vulnerable in society get on their feet, shielding them from the terrible effect of the rise in food and energy prices.

“Tighter monetary conditions will also affect financial stability, requiring judicious use of macroprudential tools and making reforms to debt resolution frameworks all the more necessary,” the bank said pleading with governments around the world to exercise caution in the use of interest rates to arrest growing inflation.

“Policies to address specific impacts on energy and food prices should focus on those most affected without distorting prices,” it added.

The bank also advised that the world should not overlook the existence of the COVID-19 virus and other infectious diseases such as monkeypox. It advised that vaccination rates must be stepped up in order to avoid another pandemic. It advised further that nations to increase their investment in green energy as the emission of poisonous gases into the atmosphere continues to endanger the lives of people and increase the number of environmental disasters worldwide.

This advice is also considered following the recent forest fire outbreak in France, drought in England, and heat waves in Europe and North America.

Explainer: How N176.9bn cabotage fund will shape shipping in 2023

Will new voters swing the 2023 election?