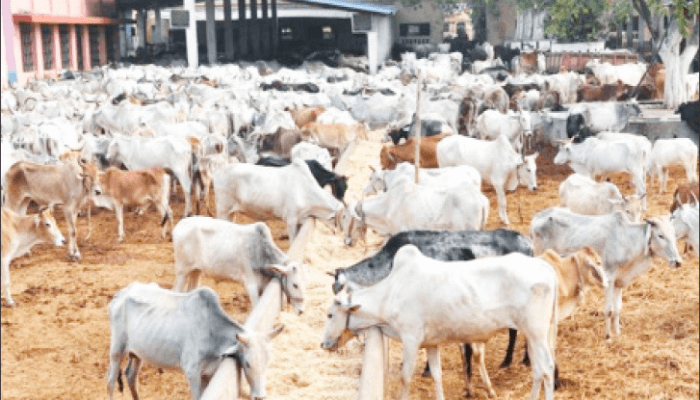 Researchers in the country have been urged to develop genetic improvement of indigenous cattle herds to help boost local production of cattle milk and meat for consumption as well as develop the subsector.

Stakeholders in the livestock subsector made the call at a ‘Strategic Interest Research Group Meeting on Livestock Genetic Improvement (SIRGM – III)’, organized by the Genetics, Genomics and Bioinformatics Department, National Biotechnology Development Agency (NABDA)/FMST, and Center for Genomics Research and Innovation (CGRI).

At the meeting held at the International Institute of Tropical Agriculture (IITA), Ibadan, Oyo state, Victor Olori, a geneticist and professor emphasised the need to increase sustainable meat production, even though the resources to do so are dwindling.

He pointed out that cross-breeding is a creative process of genetics intervention, a key innovation to secure the future of Nigerian livestock production in a globalising world.

“Even though we have 21 percent of the total grazing land in the world, only eight percent of the world output is the beef output that comes out of Sub-Saharan Africa,” he further said.

“That is 0.38 percent of efficiency output ratio and is very poor; compared to the United Kingdom where the output ratio is 5.5 percent. From two percent of the world grazing land available, UK was able to produce well over 21 percent of world output,” he added.

While affirming the need to increase the efficiency of cattle production, he said that the Dairy Development Center, in Iwo, would accommodate all processes that would enhance the genetics improvement of indigenous cattle and facilitate the ability to collect data from all animals that are performing.

“That is what will allow us to know the variance – how different the different animals are performing. The average milk from Nigerian cows is about one liter per cow, if you look at all the cows some may be doing five liters some two litres or more, so we need to be able to collect data and analyse it.

“For such data to be collected and analysed, we need a center like the center that is being proposed in Iwo Town, where we will have personnel and resources that would be able to coordinate the efforts, to record data from all the animals, analyse the data and supply the information back to farmers.”

He, however, called on the federal government to ensure that the center is equipped with the needed resources and personnel that would be able to do the job, while also advocating a Unique Animal Identification System, which means every cow in the country would carry a tag for traceability and identification, thereby solving the problem of cow rustling.

In their separate contributions at the meeting, Solomon Bamidele, former director-general of NABDA, and John Adekunle, general manager, Dairy Development, FrieslandCampina WAMCO, called for concerted efforts on the improvement of indigenous cows, saying the economic impact of the dairy industry was enormous ranging from employment opportunities to increasing the nation’s GDP.

In his welcome address, Nash Oyekanmi, director of Genomics and Bioinformatics Department in NABDA, revealed that the conference, the third of its series brought together both local and global partners to work around the Dairy Development Center, approved by the government, at Iwo town, Osun state.