Pangolin conservation gets boost as University of Ibadan allocates 3.5acres for research 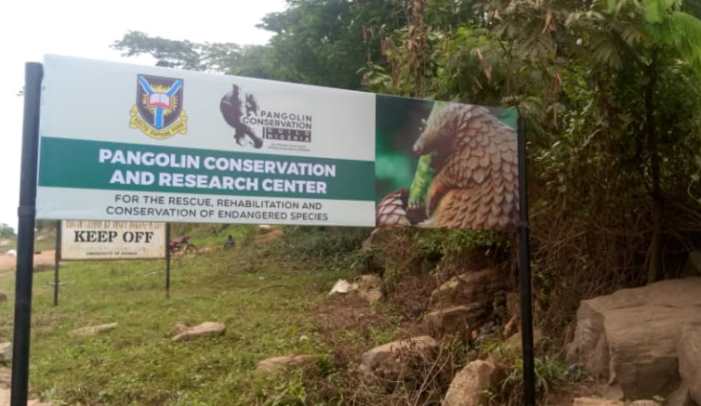 The University of Ibadan has once again shown its pride of place as the Premier University in Nigeria as it allocates 3.5acres of land for pangolin conservation and research in the country.

This is a huge step in the right direction for pangolins and other endangered species conservation in Nigeria, experts say.

When fully built, it will serve as a rehabilitation center for pangolins and a hub for conservation, research, and education.

It will be a haven of education for school children, a research hub for higher institutions of learning and it would create a reservoir for wildlife populations against extinction in the wild.

Wildlife experts noted that the center will promote conservation, education, and tourism.

The land was approved by Professor Abel Idowu Olayinka, Vice-Chancellor, UI, and handed over to Olajumoke Morenikeji, a Professor at the University of Ibadan, and also the chair of the Pangolin Conservation Guild Nigeria (PCWGN).

The allocation places the University of Ibadan as the first higher institution of learning to address pangolin conservation in the country.

Professor Morenikeji expressed gratitude to the Vice-Chancellor while describing him as a high achiever who has given the University quality leadership that has greatly lifted the institution.

“In his five years of leadership, he has made notable landmark changes to the University. Prof Olayinka will be leaving a great legacy behind as he has done a lot in improving teaching, learning, research, and innovation,” she said.

The need to actively and aggressively conserve the pangolins stems from the fact that it is the most illegally trafficked mammal in the world.

This is due to the increasing demand for their meat, which is eaten as a luxury dish in some parts of the world, and their scales and other body parts that are used in many traditional medicines.

This high demand is causing unsustainable levels of poaching and illegal trade, driving pangolins to the brink of extinction.

Experts from the International Union for Conservation of Nature (IUCN) – pangolin specialist group say over a million pangolins have been taken from their natural habitats since the year 2000.

The extent of Pangolin exploitation from Nigeria has become increasingly alarming in very recent times. This is evident in the volume of shipments that have originated from the country and discovered in the illegal wildlife trade, while in some instances enroute from other source locations in Africa.

In 2019, two huge shipments of pangolin scales totalling 25.6 tons supposedly from Nigeria were intercepted in Singapore bound for Vietnam.

In a separate incident, customs officials in the northern Vietnamese port of Hai Phong discovered 1.4 tons of pangolin scales in a shipping container sent from Nigeria.

Other threats that have affected the forest habitat of pangolins in Nigeria include timber exploitation resulting in deforestation, urban development, road and oil pipeline construction, and shifting agricultural practice among others.

As these threats have continued with little success in forest conservation efforts, the implication is that there is probably no habitat for pangolins left in Nigeria that has not witnessed some form of human disturbance or the other.

These threats have the potential to drive the remaining pangolin population to extinction if urgent multi-pronged approaches are not used for pangolin conservation.

Prof Morenikeji who was earlier quoted has been at the forefront of pangolin conservation in Nigeria.

Her group has created a lot of awareness of pangolins since the year 2016. They have rescued, rehabilitated, and released pangolins to protected forest areas.