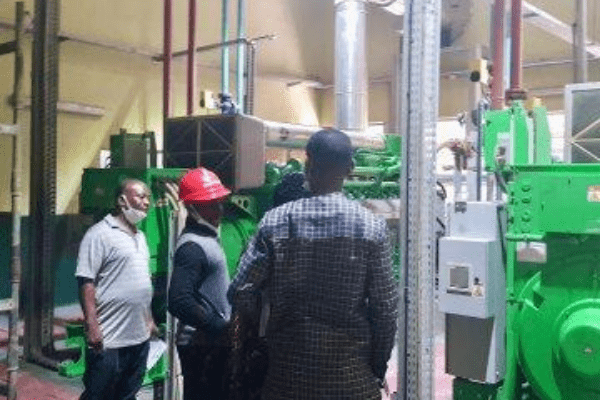 Share
Nigeria Incentive-Based Risk Sharing System for Agricultural Lending (NIRSAL) has commenced the distribution of farm inputs to Uyo Women Agro Link Multipurpose Cooperative Union under the CBN/NIRSAL Anchor Borrowers Programme for 2020 cassava wet season planting.
The ceremony took place at Obio Ndot in Oruk  Anam Local Government Area with stakeholders in the agricultural sector, government officials, and traditional rulers in attendance to witness the event.
The Acting Head Development Finance Office HDFO,  Desmond Ushie, explained that Anchor Borrowers Programme (ABP) was “one of the recent developmental intervention of CBN with the broad objectives to create economic linkage between smallholders’ farmers and large-scale processors otherwise known as the Anchor with the view to increase agricultural output”
Ushie disclosed that the Anchor ensures a ready market for the farm produce and guarantees purchase.
He said as part of efforts to stimulate the economy, CBN established the Anchor Borrowers Programme which was launched by President Muhammadu Buhari on November 17, 2015, in Kebbi state.
The CBN/NIRSAL model, according to him, “involves collaboration with NIRSAL and deployment of its Credit Risk Guarantee (CRG) instrument to Participating Financial Institution (PFI) with the expectation that the CRG will effectively reduce the risk of the PFI and enhance more participation under the programme”
Explaining how the scheme works, the Ushie said NIRSAL provides the services of a participating financial institution which include the opening of farmers’ accounts, enrolling of farmers on BVN, payment of insurance, input supplies, device providers among other banking services.
“NIRSAL is also responsible for recoveries and risk sharing with secondary responsibility of distribution of inputs”, Ushie said,  adding,  “the Anchor is responsible for aggregation to collection centers and off-take of the commodity-based on the terms of the executed tripartite agreement, while the farmers are the primary obliger”
He charged the beneficiaries of the farm inputs to get ready to farm and embrace and committed to the programme fully to achieve its objectives.
The HDFO who reminded the farmers that they were expected to commence planting immediately, said inputs will be distributed to all the 475 cassava farmers to cultivate 478 hectares of land, adding that, at harvest, Small Holder Farmers (SMHF) were required to submit all their produce to the off-taker.
“In this way, farmers do not need to look for a buyer and no farmer is required to side sale the produce”, he said.
The Head, Project Monitoring, Reporting, and Remediation Office (HPMRO), Helen Akula said NIRSAL is wholly owned by the CBN with the mandate to de-risk Agriculture and facilitate Agribusiness.
Akula, who said they started the journey of the project with Uyo Women Agro Link MPC Union two years ago, lauded the president and members of the cooperative for their steadfastness despite the challenges and several setbacks faced.
She said the project will not only empower the members of the cooperative but will create jobs for many families in the community thereby achieving NIRSAL’s mission to forge a partnership between finance and Agriculture, maximizing the potential of Agriculture for food security, job creation and economic growth.
While assuring them of success in the project, the HPMRO, quipped, “your journey to a richer life has just begun, let’s go to the farm and put in the best effort required to make it happen”
She reminded that the inputs received were not a grant but loan which must be paid back and expressed the belief that every kobo will be repaid and profit left in the bank for them to enjoy the fruit of their labour.
Akula thanked the Development Finance Office of CBN for the support given to them which she said has helped them achieve progress.
In a remark,  the programme manager, Akwa Ibom State Agricultural Development Programme (AKADEP), Okon Ndehedehe commended the resilience of the cooperative to undergo the process that enabled them to benefit from the project and expressed joy that their efforts came to fruition.
Ndehedehe said the government pays top priority to the Agricultural sector hence its huge investment in it.
He said AKADEP has competent staff who can provide technical assistance to farmers in the state and urged them to take advantage of it by approaching the staff for any assistance.
While thanking the government for providing an enabling environment for farmers in the state, the programme manager reminded the members of the cooperative of the need to key into the enumeration exercise for farmers to benefit from government incentives.
The President of Uyo Women Agro Link Multipurpose Cooperative Union, Theresa Akpan thanked governor Udom Emmanuel, the Commissioner of Women Affairs and Agriculture,  Glory Edet, and NIRSAL for their tireless effort in supporting the continuous growth and development of Agricultural sector, especially in Akwa Ibom.
Akpan expressed optimism that the flag-off of the 2020 wet season cassava planting project will place Akwa Ibom State as one of the leading cassava industry given its immense potentials.
She expressed the belief that with ith the flag-off ceremony they would be able to overcome the problems of poverty, food insecurity, unemployment, subsistence farming, and the aging population in the State.
Akpan said the flag-off ceremony was an opportunity to set in motion a dynamic mechanism to convince all stakeholders that facilitating people and strategically integrating them into the wider economic and human development where prosperity can reign in the long run.
The village head of Aya Obio Akpa,  Okon Umoh, on behalf of the host communities promised to support the project by donating enough land for the commencement of the planting.
The high point of the ceremony was the distribution of cassava stems  NPK fertilizer and other inputs to members of the Cooperative Union.
Share