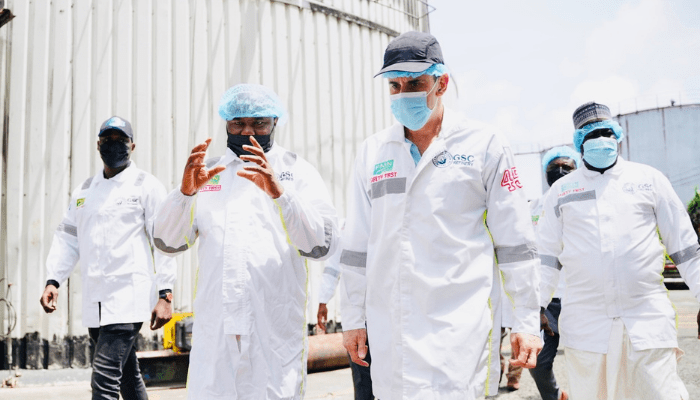 It appears Nigeria may be on a smooth sail on its trajectory to sugar-sufficiency as it is now completely refining raw sugar locally, said Zacch Adedeji, the new executive secretary of the National Sugar Development Council.

Adedeji, who has been on an assessment tour of Nigeria’s three major refineries in order to implement the Nigerian Sugar Master Plan (NSMP), concluded after his last visit at Golden Sugar, a subsidiary of Flour Mills of Nigeria (FMN) in Apapa recently.

“We now refine sugar 100 percent in Nigeria. We’ve done excellently well in refining raw sugar based on the Nigerian Sugar Master Plan that we have,” Adedeji told journalists during his visit at FMN.

NSMP was introduced in 2012 by the Nigerian government as a policy roadmap for attaining self-sufficiency in sugar production and to chart a course for the industry. Since its inception until now, there has been significant progress in the industry.

Read Also: ANALYSIS: Why Nigeria’s Sugar Master Plan must not be scrapped

He added that the tour was in line with the Council’s mandate to implement the NSMP policy to the brim whose whole point is backward integration.

The three major operators in the industry—FMN, Dangote, and BUA have had commitments in the past and have presently reviewed their commitments to ensure achievement of the mandate of the sugar master plan.

Having gone round the three refineries, Adedeji said he was impressed with current development and certain that the same commitments that have been put into all the refineries will not now be put into backward integration which requires a lot of capital, land, and commitments.

Although, he said this was a step in the right direction, vis-à-vis backward integration, the country still slow due to many challenges that we have, noting that sugar requires a lot of capital and gestation period.

Though Nigeria may have stopped importing refined sugar, it is still importing raw sugar. Adedeji, therefore, charged the key players to work harder in ensuring the country moves from importing raw sugar to growing cane, which, according to him, is the only way they can meet the desires of the master plan which is employment.

“The sugar industry presents that to us where we can have direct labour of 110, 000 when we’re in full gear of meeting 1.7 million local demand that we have by end of 2024,” he said.

He added that following through its commitment to the backward integration programme (BIP), FMN, through Golden Sugar acquired a piece of land in Sunti, Niger State where it built a sugar estate and invested over 65 billion. It has invested an additional $200 million in the refinery in Apapa, from when it signed up to the BIP.

In terms of Golden Sugar’s target under the BIP, Sadiq Usman, deputy chief operating officer, FMN, said the organisation is committed to about 250, 000 tons of per annum between its two sites and in Niger State and Nasarawa State, where it is also in the process of concluding to the process to acquire another piece of land.

On the production deficit of sugarcane, he further revealed that the current local production of sugar relative to where the country ought to be at the end of the plan is still at about five percent.

Despite the positive outlook, foreign exchange, COVID-19, logistics, and freight, and other issues regarding trade could reverse progress if not handled thoroughly. This is apart from the challenges of accessing the factory in Apapa.

However, Usman said the bigger challenge is ensuring that the industry has the support of the government and the support of all the players in the industry to ensure that the commitment that the National Sugar Development Council gave comes to reality, and is backed up by both a carrot and a stick approach.

“That’s the most important thing for us,” he said. “To make sure that what government says is the agenda and should stand by it and the rest of the players in the industry, including ourselves.”

“Also, when we get the necessary support that the rules of the game are transparent and are clear and followed by all the parties to ensure success. That’s what most important for us in the medium to long term, otherwise, we’re not going to meet this target,” he added.