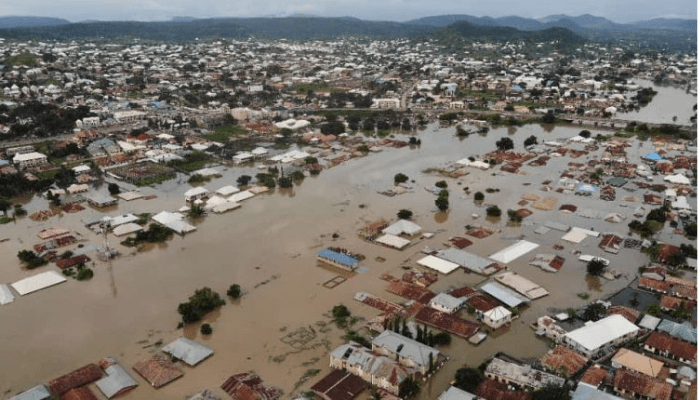 The floods that ravaged many parts of Nigeria recently have left livestock and fish farmers reeling from heavy losses.

Fishes thrive inside water but when the water becomes excess, they can be swept outside their enclosures, leading to losses for farmers.

Like other aspects of the economy, the livestock industry has also suffered setbacks at different levels of its value chain, with the recent floods drowning thousands of animals including poultry, pigs, small ruminants, cows, and even wildlife.

On October 20, Innocent Alu, a farmer in Bayelsa, took to Twitter to lament the loss of his fishing and poultry businesses as the floods submerged his farm. The farmer, with the handle @iamElderson, posted videos showing his birds as they lay dead on his flooded farm.

“I don’t know how to feel right now, watching my investment destroyed gradually before my very eyes,” he said in a tweet.

He said he could have slaughtered all the birds and stored them in the cold room but there was no power, and all the cold rooms he knew of had been submerged by the floods.

“The flood in Bayelsa has taken away everything that I’ve laboured for. My investment is gone but also my 17 employees have lost their source of livelihood.” Alu said. He had also said his ponds had fishes at the grow-out stage, and all were lost when the floods came.

About three months back, farmers at Erinwe Village in Ogun State had also reportedly lost over N300 million worth of fish, as the fish were washed away by flood.

“In some cases, the plantations, livestock, and fish were lost completely, whereas in others, sizable quantities were lost. On the whole, we can safely say that about 60 percent or more of expected farm yields were lost to flooding,” Ibrahim Kabiru, national president of the All Farmers Association of Nigeria said.

Climate change-induced floods threaten fish farming as it affects the quality of water and the state of fishes.

Osky Integrated Nigeria Limited, a company that specialises in the catfish value chain and the first company to make fish sausages in Africa, said it lost hundreds of thousands of metric tonnes of fish estimated at over N100 million during the flooding that washed away many of the mature fishes that were ready for harvest.

The flooding also swept in effluents and pollutants into the water for the ponds, thereby contaminating the water and causing the death of various species of fish farmed in those locations.

Experts who spoke with BusinessDay suggest a strong livestock-focused early warning and response system as in livestock emergency interventions.

Findings also show that the floods caused many animal health challenges through the circulation of dangerous pathogens that made many animals that survived the flood’s initial surge become sick, dehydrated, suffer from food shortages, and starve to death.