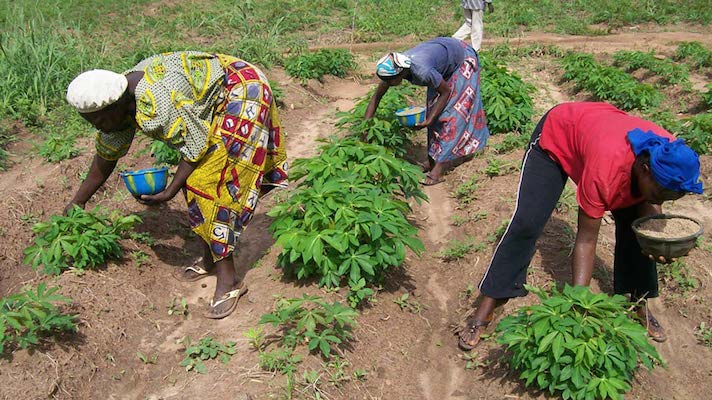 As killing of innocent persons in Delta State by suspected Fulani herders continue unabated, some farmers have come out boldly to demand that the herders leave their bushes; they have also asked Governor Ifeanyi Okowa to come to their aid.

The farmers want their governor to act now and save their lives and farms while demanding that President Muhammadu Buhari should resign from office. “Buhari must go”, they demanded.
The famers are from Abraka community in Ethiope East Local Government Area and Obiaurku community in Ukwuani LGA of the state.

They were about 2,000 in number as they blocked and occupied the Agbor-Abraka highway over the constant killing, maiming of farmers and raping of women in their communities. They said, “enough is enough.”

They displayed placards with inscriptions such as, “Okowa stop Fulani herdsmen”; “Okowa stop the killings now”; “Stop killer herdsmen now, Okowa come to our aid”; “Okowa we say no to Fulani killer-herdsmen now”, and “Okowa your people are dying”, as they blocked the ever-busy highway for hours.

Through the inscriptions, they also demanded that “Buhari must go”, “Okowa must act now,” “We don’t want Fulani herdsmen again,” and “Fulani herdsmen must leave our bushes.”

According to Oasis Magazine report, the Chairman of the association of farmers in Abraka/Obiaruku communities, Idigun Duke, said the attack on farmers over the years have become alarming, hence they took to the street to draw government’s attention to their plight.

“The protest today is all about the killing of our farmers inside the bush and raping and killing of our women. Someone will go to the farm and won’t come back home. We have written a petition to the governor and protested to the Delta State House of Assembly. The lawmakers asked us to write a petition to the governor which we did. The governor asked us to forward the petition to the Commissioner of Police which we also did. But, no one wants to act; they said we should live together that Aboki is our friends. But now, friend dey kill friend? They will root our cassava and give it to their cows to eat. Our farmers no more go to farms again. We want to see our governor. Let him come and address us.

“A farmer was killed on Sunday with his two children. They also carried a vigilante into the bush till now they are still looking for him. Another vigilante was shot on his stomach. He is at the hospital for medical attention.”

According to him, the number of farmers so far killed is uncountable; this he said has made many of their people to be hungry because they can no longer go to farm, adding that, “a hungry man is an angry man.”

Duke further said: “The whole farmers are now hungry because we no more go to the farm. Even if you go, the cassava has been eaten by cows and we are not given compensation.

“We don’t know if we have a governor because if we do, he must come to address us here. We don’t want the DPO and we won’t leave here until we see the governor.”

“Our demand is that they should go and clear the bushes immediately so farmers can start going to their farms and come back home,” he said.

Speaking further, he said for over a year he has not gone to the farm.

Recall that last Sunday, a farmer, Mike Egba, an engineer and resident of Obiaruku while returning from his farm in the area, was killed by suspected Fulani herdsmen alongside his son and close relative along Abraka/Benin Road by Oghonogbo farm settlement junction.

Egba was also a staff of Delta Staff University, Abraka, attached to the Physical Planning Unit.

These two communities are not the only Delta Communities that are experiencing the heinous attacks of the suspected Fulani herders.

Today, the situation has become so pathetic that farmers in communities near Asaba, the state capital, can hardly go to their farms and equally have no other sources of livelihood.
The pain is deep and palpable. They now accuse the political leaders of doing little or nothing to help the situation.