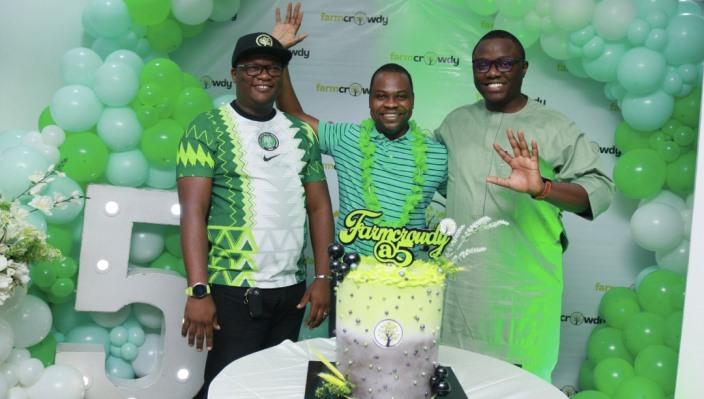 Farmcrowdy, an Agtech firm that leverages technology to connect stakeholders with access to aggregate farm produce, in raw form and processed food has celebrated its fifth anniversary by organizing a Webinar series to champion discourse on boosting productivity.

The Webinar had conversations around powering food solutions in Nigeria and across the globe, with Kwasari, stressing the importance of a convergence in order for the sector to thrive, as well as fiscal and monetary policies.

On his part, Maigari was of the opinion that creating a convergence of the public with the farmers will foster confidence in spite of insecurities. To revolutionise the Agric sector, everybody has a role to play. Areas such as road development, statistics, finance, health are some key areas to the development of the industry, Adelaja noted.

Within its first 2 years, Farmcrowdy says it successfully raised a combined $2.4m in grants and equity investments from venture capitalists and Angel investors in Nigeria and the United States. The company also says it has been able to amass a network of over 400,000 farmers, cultivated across 17,000 acres of farmland, reared 3 million organic chickens, and deployed funds for farming projects across 36 States in Nigeria.

Moving away from crowdfunding in August 2019 as a source of funding for farmers, Farmcrowdy says it now connects smallholder farmers to DFIs provided by government agencies, access to market and processed food. A few months ago, Farmcrowdy reviewed its business structure to evolve into two strategic business lines called FC Foods and FC Shops. FC Foods serves as a digital marketplace for trading raw agro-products, inputs and commodities. Consumers can conveniently purchase fresh foods products and groceries. FC Shops, on the other hand, is a tech-enabled B2B retail platform that helps small retailers source their inventory by facilitating access to the widest assortment of FMCG goods at wholesale prices.

At the, Farmcrowdy also announced its expansion into East Africa, with Fiona Umulisa, its country manager in Rwanda, discussing Farmcrowdy’s impact in the region.

“We (now) have a footprint in Rwanda,” said Akindele, Farmcrowdy’s CEO “As of now, we are doing more collaborations beyond Nigeria”. He also stated that almost all underwriters from the past operations are partakers in the food value chain.