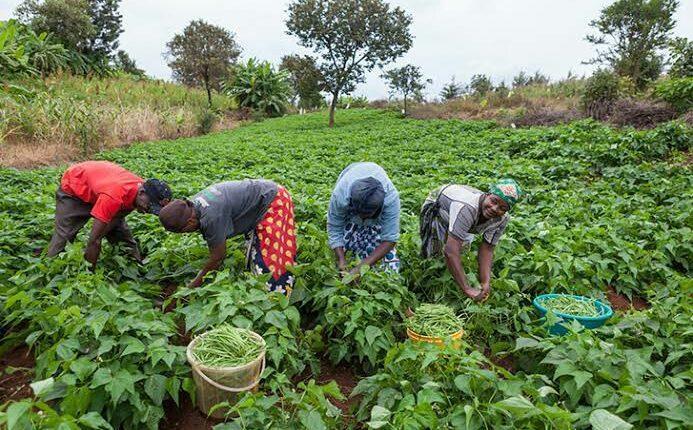 African farmers are the unsung heroes of the COVID-19 pandemic, and African Farmers’ Stories is a platform to let them tell their stories, and examine at how important they are to us surviving the COVID-19 pandemic.
Okorode Christian, “the Millionaire farmer”, founder of Millionaire Farms Limited and 2017 Future Awards Africa Prize for Agriculture nominee, has a farm with over 10,000 plantain suckers in Bayelsa state and has trained over 4000 youths in agriculture. Having become interested in the agricultural sector during his NYSC, he went into agriculture to help solve hunger, food shortage and unemployment problems in the Niger Delta, and across Africa.

He highlighted the security challenges that farmers face, both before and during the COVID-19 pandemic. When produce is being transported to the market, police officers on the road often have to be “settled”; it is so bad now that Christian says he had to get a police escort to avoid harassment. Farmers also need to be classified as essential workers by the government, as some farmers now cannot access their farms because of the restriction of movement. Farmers need free passes to their farms and need to be able to take their produce to anywhere it is needed in the community.

To solve other problems faced in agriculture such as food wastage, he describes the importance of harnessing the power of collaboration, which he calls as the “new gold”, via facilities to allow farmers store their produce at relatively low prices, establishing factories, so that produce can be directed for processing, and the need for farmers to find a market for their produce before harvest. He notes that, “the fact that people eat food does not mean that everyone will eat your produce or that there is a market to sell to”.
The government also has role to play in strengthening the sector through policy implementation, because Nigeria has no established database of those involved in agriculture, making it difficult for real farmers to access government funds that are allocated yearly, and these funds sometimes end up with people who are not farmers.
For those seeking to be involved in agribusiness, Christian emphasises the need for adequate knowledge before getting started in any aspect of agribusiness. He advises would-be investors to identify a problem in the value chain, make sure it is fully understood as there is a lot of value to extract within every niche, and play heavily into it.

Goru Wilson is a farmer and an investor in the Nigerian Farmers’ Group & Cooperative Society (NFGCS), a cooperative society which leverages on the power of crowdfunding to tackle the issue of food shortage and explore the agricultural sector in Nigeria. Its major farm is in Ga’ate, Kokona LGA, Nasawara State, with another farm settlement in Adamawa State, and it is an integrated farm with its own brand of rice – Ga’ate Gold.

Goru’s journey into agriculture began through interactions with people with the same belief in Nigeria to feed herself. The crash of the MMM scheme in February 2017 that raised ₦3 to 4 billion inspired them to leverage on this same idea to pool resources and properly manage them to solve the real problem of food shortage.
Factors such as the difficulty of accessing loans from commercial banks with their double-digit rates and high collateral, the expense of acquiring farm equipment, exploitation by middlemen because of a lack of off-takers, difficulty in accessing affordable storage facilities, and the provision of infrastructure to surrounding communities, such as good roads, power and a dam to ease business all translate to increased business costs and make food produced in Nigeria more expensive for Nigerians.

A few fintech companies, like Kiakia have provided massive support for NFGCS, but there is a limit to what they can offer. The government, through the Anchor Borrowers’ Scheme and NIRSAL was supposed to help farmers, and in their first year, NFGCS attempted to access NISRAL loans, but the officials came to visit the farm 8 weeks after their maize crop had been planted, showing how the bureaucratic nature of government agencies can affect farmers. In another incident, NFGCS received approval for a tractor from the Ministry of Agriculture, but were hindered because an official insisted on a bribe. When refused, the approval went missing, and the tractor still has not been received.
Goru also emphasised the role of modified localised solutions to maximise profits and employ more labour into the sector, citing the farm’s fabrication unit, made up of carpenters, welders and other technicians, who make a lot of its processing equipment out of wood and blocks.