A China Eastern Airlines plane carrying 132 passengers has crashed and caused a fire in the mountains of Guangxi in Southern China as reported by sky news.

The number of casualties is yet to be known and rescue teams are on the way, CCTV reported.

The Civil Aviation Administration of China (CAAC) in a report stated that the aircraft lost control over the city of Wuzhou carrying 123 passengers and 9 crew members.

Read also: Plane with 14 people on board crashes in Indian Ocean

CAAC said it had sent a team of officials and the Guangxi fire service said in a report that it was working to control the mountainside fire ignited by the crash. NASA satellite data showed a huge fire in the area where the plane went down 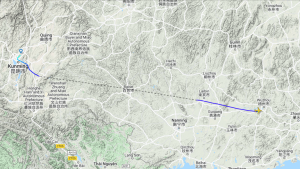 China Eastern Airlines’ website was afterwards converted to black and white, as is customary in the aftermath of a tragedy as a show of respect for the deceased.

According to the Aviation Safety Network, China’s last deadly jet accident occurred in 2010, when an Embraer E-190 regional jet piloted by Henan Airlines crashed on approach to Yichun airport in bad visibility, killing 44 of 96 persons.