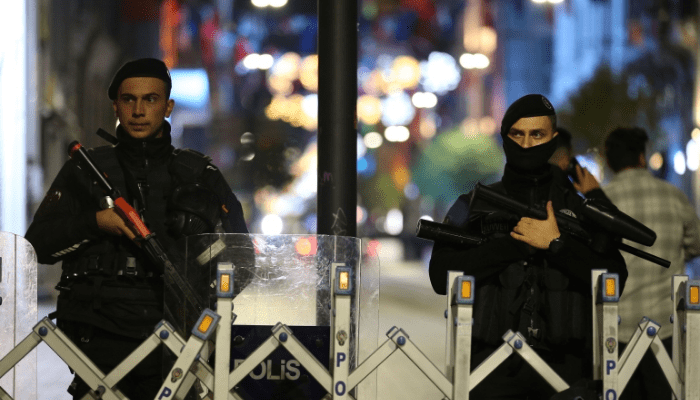 Turkish police have arrested 46 people over the explosion in central Istanbul that left at least 6 people dead and 81 others injured.

The country’s interior minister Suleyman Soylu told reporters on Monday that the suspects included the “person who left the bomb that caused the explosion” on the busy Istiklal Avenue in Turkey’s largest city.

Soylu blamed the outlawed Kurdistan Workers Party (PKK) for Sunday’s blast, in the popular shopping and tourism spot, saying: “Our assessment is that the order for the deadly terror attack came from Ain al-Arab [Kobane] in northern Syria,” where he said the group has its Syrian headquarters, Al Jazeera reported.

“We will retaliate against those who are responsible for this heinous terror attack,” he said. He added that 81 people were wounded, two of them in critical condition.

The PKK has issued a statement in which it denied involvement in the attack, and expressed its condolences.

Turkish President Recep Tayyip Erdogan on Sunday described the explosion as “treacherous” and said it “smells like terrorism”.

Justice minister Bekir Bozdag told A Haber television later on Sunday that a woman was seen sitting on one of the benches on Istiklal Avenue for more than 40 minutes.

The explosion occurred just minutes after she got up, he said.

“There are two possibilities,” he told A Haber. “There’s either a mechanism placed in this bag and it explodes, or someone remotely triggers it”.

Al Jazeera has obtained pictures of the woman suspected to be behind the bombing.

In initial questioning, the woman said she was trained by Kurdish militants in Syria and entered Turkey through northwest Syria’s Afrin region, the police said.

Television news reports also showed images of a person, who appeared to be a woman, leaving a package below a raised flower bed on Istiklal, which has a tramline running the length of the street.

Two more Syrian nationals were involved in the attack, according to security sources.

“The interior minister mentioned that these perpetrators are linked to the YPG, the Syrian Kurdish fighter group, which Turkey considers as an offshoot of the outlawed PKK,” Koseoglu said.

“We’re waiting for officials to give more details about the suspects… [including] how they crossed the Turkish-Syrian border as Turkey has been very strict about Syrians who are staying in big cities without residential permits or without being registered.”

She added that the woman seems to be in her late twenties or early thirties and “was captured by the police in the place where she was staying” at 2:50 am.

According to Istanbul police, 1,200 security cameras have been checked near the site of the explosion. Police have conducted raids at 21 different addresses the female suspect has been identified to have links.