These stocks delivered most value to investors last week

The release of earnings results for the 2018 financial year by listed companies failed to lift Nigeria’s stock market last week, rather the market dipped further by 2.45 percent to settle at 31,142.72 points.

That drove the return of the Nigerian Stock Exchange back to the negative territory of -0.92 percent after the close of business on Friday, causing investors to lose over N291 billion of their wealth to the rout.

In spite of the bearish performance at the Lagos bourse, eighteen companies could deliver value to their shareholders, forty-five firms were caught in the flood of losses recorded in four of the five trading days, while one hundred and five equities remained unchanged during the week.

During the week, FBN Holdings, Zenith Bank and Diamond Bank Plc were the most traded stocks, accounting for 551.865 million shares worth N6.60 billion in 3,116 deals and contributing 49.60 percent and 49.03 percent to the total equity turnover volume and value respectively.

Both Access Bank and United Bank for Africa (UBA) released their 2018 financial results during the week. The tier-one lender grew its gross earnings by 15.17 percent to N528.7 billion, pre-tax profit increased by 32 percent to N10319 billion, while profit after tax surged 58 percent to N94.98 billion.

UBA on the other side could only grow its gross earnings by 7.04 percent, its profit before tax rose by 1.37 percent to N106.77 billion, while it recorded a paltry growth of 1.37 percent in its post-tax profit to N78.61 billion. 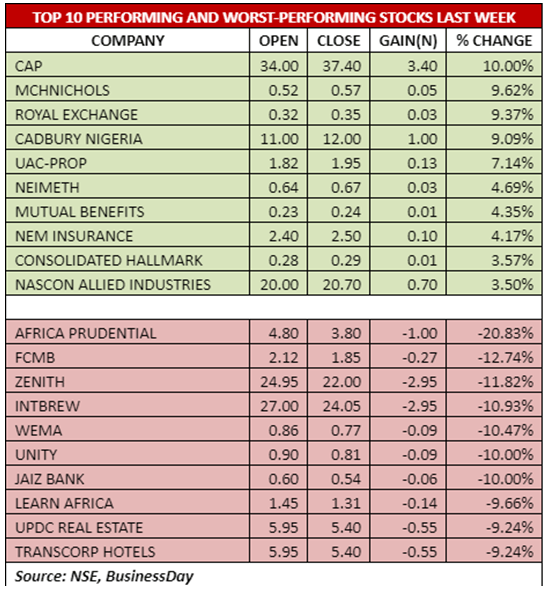 Here’s what you need to know about cold room business

Top ways entrepreneurs can win in a tough business environment