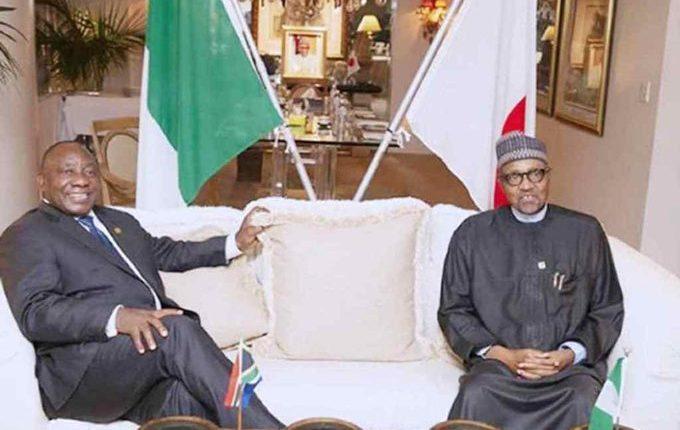 President Muhammadu Buhari on Monday met behind closed doors with the special envoy of President Cyril Ramaphosa of South Africa.

The three envoys arrived the forecourt of the Presidential Villa, Abuja around 2.13pm led by the Acting South African High Commissioner to Nigeria, Bobby Monroe.

The envoys are in Abuja as part of fence-mending tour of African countries over the increasing xenophobic attacks on Nigerians and other Africans living in South Africa.

Their visit is coming on the heels of the recent evacuation of the first batch of 187 Nigerians who returned last week Wednesday with more are expected to follow tomorrow, Tuesday.

The fence-mending tour is part of efforts by Ramaphosa to ward off a diplomatic row with other African countries.

The South African President had dispatched three special envoys to Nigeria, Niger, Ghana, Senegal, Tanzania, the Democratic Republic of Congo and Zambia, to deliver messages of pan-African unity and solidarity, after being booed in Zimbabwe.

The envoys are expected to deliver messages on how the embattled South African country will end the violence that erupted in some parts of South Africa resulting in attacks on foreign nationals and destruction of properties.

They are also expected to reaffirm South Africa’s commitment to the rule of law, as well as brief Buhari on the steps that the South African government is taking to bring a stop to the attacks and to hold the perpetrators to account.

Xenophobia attacks in South Africa have been on the rise as foreigners were accused of taking up employment that should have been for locals.

As a result of the attacks on Nigerians, Buhari had also sent a special envoy led by the Director-General of the National Intelligence Agency, Ambassador Abubakar Rufai, to Ramaphosa.

Rufia had submitted his report to President Buhari on his return to Nigeria.

The meeting was still in progress at the time of filing this report.