Apart from earning the designation of a commercial capital, Lagos has also become the tech capital of Nigeria and West Africa. The state accounted for 100 per cent of investments worth more than $1 million in technology startups in Nigeria between January and July. Lagos’ suzerainty of tech funding activities in the country for many years, while it is desirable, often comes at the expense of startups in other states.

Lagos state’s exploits in the funding market in Africa notwithstanding, Nigeria has perennially played second fiddle to South Africa and fallen behind Kenya a couple of times. Plus it has new competition from Ghana, Egypt and Uganda. 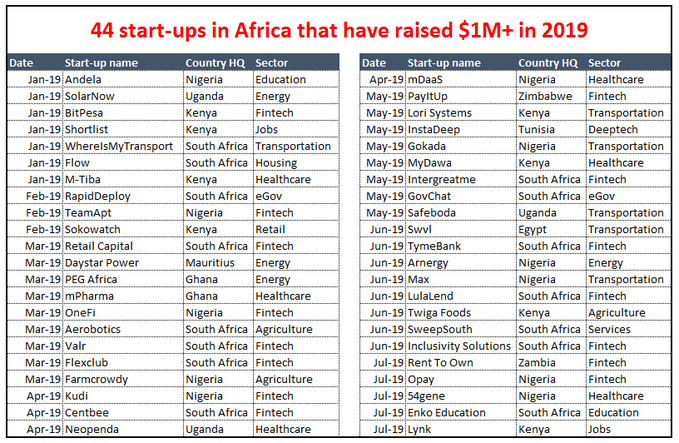 The 11 Nigerian startups on the list are part of 44 firms in Africa that have raised a cumulative $450 million between January and July. While 80 percent of the firms are located in South Africa, Nigeria and Kenya, the top deals account for 70 per cent of the total funding.

South Africa remains the top tech ecosystem in Africa – many years in a row – with 15 startups making the 2019 funding list. Aside from being adjudged the most mature tech market on the continent, unlike Nigeria, South Africa has more than one state dominating the activities. Although, Johannesburg and Cape Town are seen as the most dominant tech hubs in the country, Pretoria still had a startup representing it on the list.

There are over 77 technology hubs in Nigeria with about 12 new ones scheduled for launch before the end of 2019, according to a research. With 36 hubs, Lagos has the largest number of hubs and Abuja is second with 13. States like Enugu has about 5 hubs, Rivers 5; Kwara has two; Delta 3; Abia 2; Cross River 2; Ondo 3; Kano 2; Oyo 2; Ogun 3, among others.

In a March 2018 report, GSMA categorized Lagos as the largest tech hub in Africa by the sheer number of startups popping up at the different corners of the state. But that hype may soon not amount to much if startups in other states continue to struggle to raise funds to keep them alive and if investors are driven away from investing due to the economic environment.

Investors are not going to wait for ever to tap Nigeria’s famous 200 million population. They are also not looking for places to throw away money. There has to be participation from other states to increase the investment pie. It could mean taking with intentional steps by creating an enabling environment for the growth of startups – if necessary committing funds, well thought legal framework that not only protects consumers, but the investors and businesses involved.