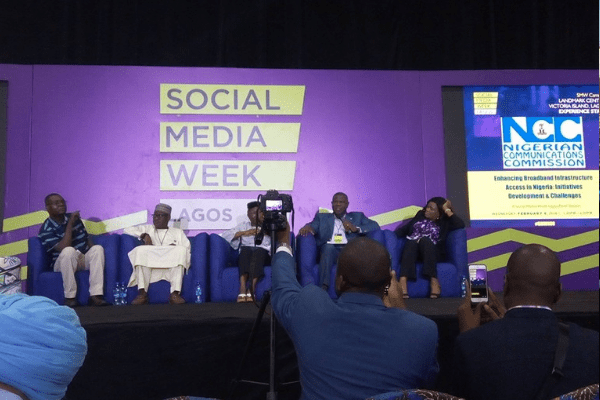 The Nigerian Communications Commission (NCC) says it is talking to four infrastructure companies (InfraCos) in the country to provide financial respite in terms of subsidy to enable them deploy their broadband infrastructure across the country.

Funding is one of the challenges that undermine the efforts of InfraCos to deploy broadband infrastructure to every part of the country.

The commission plans to make an announcement on Friday on the percentage of subsidy it will be required to provide after its ongoing discussion with two of the four InfraCos.

At a panel session titled ‘Enhancing Broadband Penetration in Nigeria: Initiatives, Developments and Challenges’ at the Social Media Week Lagos 2019, Nnamdi Nwokike, director of Public Affairs, NCC said penetration target of 30 per cent which was set in 2013 and laid out in the National Broadband Plan has been surpassed. As at November 2018, Nigeria hit 32 per cent penetration surpassing the 2013 target. Hence, the commission has set a committee to come with a new national broadband penetration target which is expected to be higher and in line with global internet realities.

“We have to raise the speed of broadband to meet global standards,” says Bako Wakil, head of Technical Standards and Network Integrity.

Nigeria lags behind other African countries in terms of speed of internet. The Speedtest Global Index for May 2018, shows Nigeria ranking as low as 108 in the world on mobile internet speed at a download speed of 10.04 and upload speed of 9.35 megabytes per second (Mbps), whereas countries like Tunisia, Morocco, Egypt and Kenya are ranked 71, 72, 85 and 87 respectively with download speeds of 19.21, 18.52, 15.89 and 15.39 Mbps. The global average download speed is at 23.57 Mbps.

The subsidy proposal by NCC is actually included in the National Broadband Plan as part of the activities required to achieving the targets set out by the plan. However, this could be the first time NCC is seriously exploiting the opportunity to encourage InfraCos.

Wakil explained that in view of plans to position Nigeria as part of the connected world targeting 50 billion connected devices by 2050, the commission needed to increase its pace.

“We are talking of Internet of Things, 5G internet which will lower latency and smart cities, these cannot be realized without superfast internet,” Wakil.

Nevertheless, the subsidy will only be given to InfraCos that have already deployed infrastructure.

Broadband infrastructure deployment has not met expectation despite the issuance of licenses to six infrastructure companies. The country currently has broadband capacity of 9 terabytes but the absence of infrastructure to deploy this capacity has been a major challenge for authorities and operators.

One of the hurdles has been the Right of Way charges that states in Nigeria demand. While the commission has worked on the federal government to come up with a unified price of N145, many states still demand higher levies. For instance, in some states Right of Way charges could go as high as N7,000.

Aside from that, there is duplication of approvals across the states, ensuring that operators have to go to different departments to get an approval that has already been given at the federal level.

Local government areas also have taxes they levy on cable companies before they are allowed to lay cables. In other words, operators are forced to pay multiple fees which in turn impacts their operation cost.

Iyabo Sholanke, director of Special Duties said the NCC was engaging the state governors through the Nigerian Governors Forum (NGF). The engagement, she disclosed, is beginning to yield some positive results as some of the state governors are starting to realize the potential in addressing the Right of Way.

The goal of the engagement “is to get the state governments to agree to harmonize the price.” Harmonization removes the difficulties the operators go through and give a clearer picture of what is required for cables to be laid.

At a recent event organized by Deloitte Nigeria, Jumoke Oduwole, senior special assistant to the Nigerian Vice President on Trade and Investment and secretary of PEBEC revealed that Kaduna was the only state in the country that has eliminated Right of Way charges and is making it easy for internet infrastructure to be deployed to the state.