Altcoins gain as bitcoin on track to flattest month since 2015 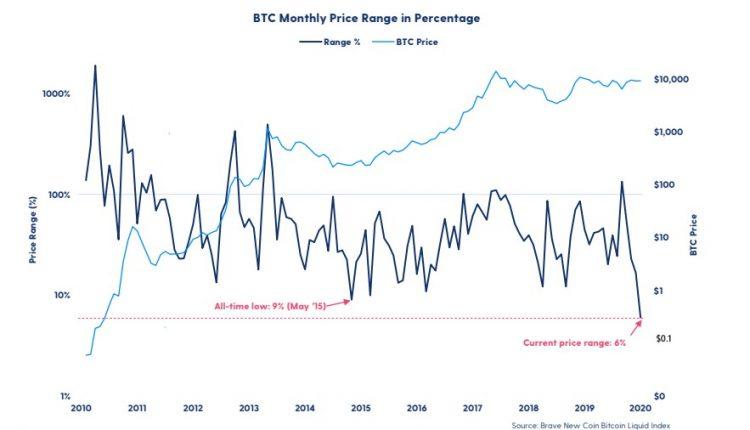 Smaller valued cryptocurrencies also known as altcoins are the biggest winners in the month of July which has seen the largest digital coin, Bitcoin on track to witnessing its flattest month in five years, says a report by Arcane and Luno.

The month of July has seen extremely low volatility, with the price ranging between $9470 and $8930, or within a 6 percent range. The last time it saw such a tight range was in May 2015, where the price traded within a 9 percent range.

The tight range has historically been followed by large price movements, and the researchers say it is very possible the market is close to some big movements relatively soon.

“We started writing about the low volatility in the end of June, but it didn’t stop there,” Bendik Norheim Schei, CEO of Arcane said about the report. “If bitcoin doesn’t push above ~$9700 or drops below ~$8700 within the next 9 days, July will end up as the flattest month ever. A big move is certainly brewing.”

But bitcoin’s price range in December 2020 is not cast in stone. Option traders, for instance, are cautious about where prices go, hence, option prices show a probability of 35 percent for BTC to be above $10,000 by the end of December.

Bitcoin’s volatility is also on the verge of setting a record having gone on a 7-day low volatility. The report shows that the 7-day volatility is now down to levels not seen since October 2018 where the bitcoin price crashed down 50 percent from $6,000 to $3,000 when the volatility came back.

The cryptocurrency market was up 3.08 percent on Thursday morning, according to the Coinbase Index. While bitcoin gained 2.18 percent, Ethereum took the shine with a +8.73 percent. Tether, XRP, and Bitcoin Cash were also up by +0.11 percent; +2.88 percent; and +4.20 percent respectively.

Ethereum price surge is largely driven by the much anticipated Ethereum 2.0 upgrade scheduled for later this year. Ethereum 2.0 is a major upgrade to the current Ethereum public mainnet, designed to accelerate Ethereum usage and adoption by improving its performance. On Wednesday the Ethereum 2.0 developers released the specifications for the official testnet.