At a thrilling final game played at the Yaba College of Technology Sports Complex on Saturday, UNIMAID Desert Warriors from the University of Maiduguri defeated debutant AAUA Luminaries from the Adekunle Ajasin University Akungba by 1-0 to emerge Champions of the 2021 Higher Institutions Football League (HiFL). The game set out in an attacking mood with the AAUA Luminaries pushing hard to score the first goal. However, the defence of the Desert Warriors led by Abdulrahaman Musa and Ochei David Michael thwarted every move by the attacking front line of the Luminaries led by Ologbon Emmanuel and Rotimi Ayomide to end the first half goalless.

On resumption in the second half, the Desert Warriors took the initiative and succeeded in the 62nd minute of the game when the team captain and StanbicIBTC Man-of-the-Match, Ochei Elijah Francis met a cross from the right to nod the ball past Isaac Phillip in the goal for the Luminaries. The Luminaries turned on the heat on the Desert Warriors, but it was too late as the Borno Boys held their nerves to cross the 90th minute.

Speaking after the match, the Vice-Chancellor of the Adekunle Ajasin University, Prof. Olugbenga Ige said “despite the defeat, I feel elated because what is important is participation. We have participated and we have come this far. We have defeated several universities and we are the first state university to reach the final. So, for me, it is gratifying because one team must win. We have put up a very good showing and every spectator in the stadium today attested to that. That we came second is part of the victory. We thank HiFL for this opportunity and we hope our university do better next year” Ige said. 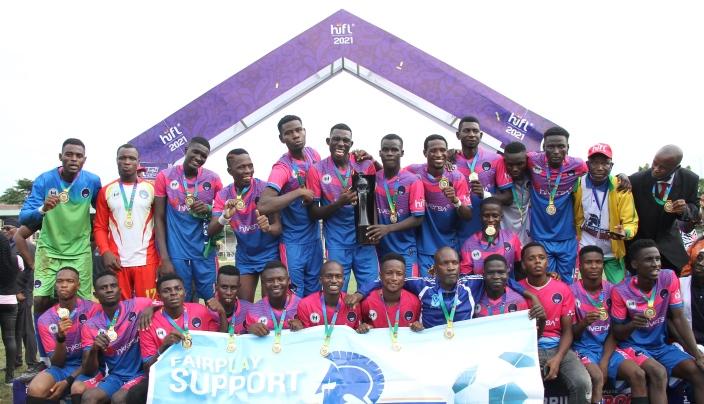 In his reaction, the Coach of the UNIMAID Desert Warriors, Dauda ‘Ziko’ Daniel explained that “we had a very good preparation from the beginning of this competition, and we have been supported financially and morally by the school authority. This is the result of their support. At some point, my players, most of who are visiting Lagos for the first time were jittery. However, I pointed at the trophy and told them that that is the sign of glory for them if only they can hold their nerves and win the match. It was difficult but we thank God”.

Chatting with journalists, Chief Strategy Officer, PACE Sports and Entertainment Marketing, Goodness Onyejiaku said “we appreciate StanbicIBTC, Nivea Men, Bold and Minimie and the Nigerian University Games Association (NUGA) for their support. We have all enjoyed this season and look forward to a more interesting HiFL in 2022”.