Premier League summer transfer spending was only slightly down from recent years but it was much higher than Europe’s other top leagues, as the transfer window closed.

There were 12 deadline-day signings on Monday, 5 October – the fewest total in recent years.

Arsenal signed Atletico Madrid midfielder Thomas Partey for £45.3m in the biggest deal of the day.

The deadline was later than usual as a result of the coronavirus pandemic and the season starting later. The previous two Premier League windows had closed before the more traditional start to the season in August.

“Total expenditure on player acquisitions is significantly down across all the top five European leagues against the five year average – ranging from -7% in the Premier League to -46% in La Liga,” said London-based investment company Carteret Analytics.

“It is a fair assumption that Covid-19 has caused this significant contraction in the player transfer market in this window.”

Everton brought in Norwich defender Ben Godfrey for £25m in the second most lucrative transfer of the day.

However they did not sign long-term target Jadon Sancho from Borussia Dortmund.

Premier League spending was more than three times as high as in La Liga, Bundesliga and Ligue 1 and double that in Serie A, said Carteret.

The group advises three Premier League clubs, and another 12 leading sides from around Europe and the rest of the world, on potential new signings and transfer finances.

Notably Premier League clubs spent £820.2m more on bringing players to the division than they recouped for selling players to other leagues – higher than the five-year average. By contrast La Liga (£58.6m) and Bundesliga (£8.9m) received more transfer fees than they spent this summer.

For the past two seasons the Premier League transfer deadline was before the season started but this season clubs voted to revert back to 31 August. However, the deadline across Europe was moved again because of the coronavirus pandemic.

Manchester City’s capture of Dias and Chelsea’s £71m signing of Bayer Leverkusen midfielder Kai Havertz were the only Premier League transfers of £50m or more this summer. 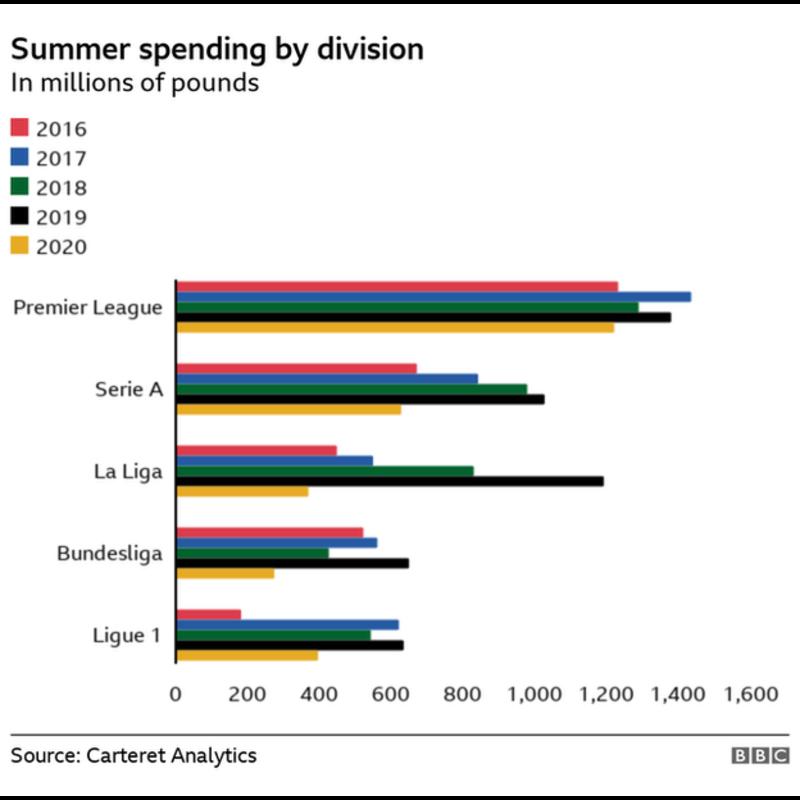 Chelsea were the big spenders this summer, shelling out £222m on players including Havertz, Timo Werner, Ben Chilwell, Hakim Ziyech and Edouard Mendy, according to Carteret. Manchester City (£141m) and Barcelona (£112m) were the only other major European sides to spend more than £100m.

Former Manchester City and England defender Micah Richards has picked his three signings of the summer – all of them happening for £20m or below.

Liverpool signed Bayern Munich midfielder Thiago Alcantara for £20m, Everton brought in Real Madrid playmaker James Rodriguez for a fee the BBC reported as £12m but it has been claimed in other places it was a free transfer and Tottenham re-signed Real Madrid winger Gareth Bale on loan.

“James has just been a revelation. What a player he is. I knew he was quality and would perform, he just needed some loving and Carlo Ancelotti has certainly given him that. He is my number one, definitely,” Richards told BBC Sport.

“I know we have not seen him in action yet but I still think the Gareth Bale deal is amazing. Even if he is just 75% of the player he was, defenders, look out for Gareth Bale.

“Thiago won the Champions League last year, so for Liverpool to get that calibre of player for the price they did, he has got to be one of my top three signings of the window.”

Fueling the anger in the land!