The Federal Government of Nigeria has handed the President of Nigeria Football Federation (NFF), Amaju Melvin Pinnick backing in his quest to win a seat on the FIFA Council – the highest decision-making organ in world football – at next week’s Confederation of African Football (CAF) elections in Rabat, Morocco.

At a press conference addressed by the Permanent Secretary in the Federal Ministry of Youth and Sports, Engineer Nebolisa Anako on behalf of the Hon. Minister Sunday Dare in Abuja on Thursday, the Government stated unequivocally that “ Amaju’s ambition would further reposition Nigeria in the global football map where we have made remarkable inroads” and indicated that his triumph would follow in the glorious steps of illustrious compatriots Dr Akinwunmi Adesina (re-elected as President of Africa Development Bank) and Dr Ngozi Okonjo-Iweala (first female/ first African Director-General of the World Trade Organization) in recent times.

“If the NFF President wins the position, it would not be a victory for the Federal Government and all Nigerians alone, but the African continent. He would be a great ambassador of our great country if elected into the FIFA Council. As a member of the CAF Executive, Pinnick is aware of the task ahead and the Federal Government’s support to the actualization of his dream,” Anako said. 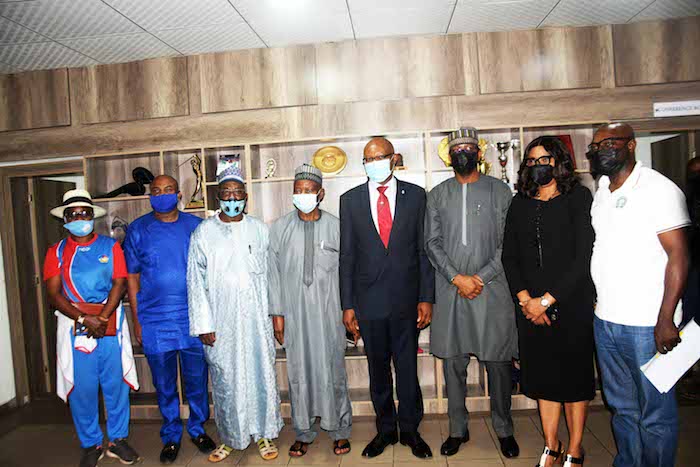 He added: “On behalf of the President of the Federal Republic of Nigeria, Muhammadu Buhari GCFR, and all Nigerians, we hereby pledge our unflinching support to Pinnick because his victory would be our collective victory.

“Sports Minister believes Amaju can use his position and connections in CAF and FIFA to help promote and develop Nigeria and African football in all ramifications. Let us be resolute and firm in our support…This is no time to stand on the fence, but to be partakers in the scheme of things.”

NFF’s 2nd Vice President, Mallam Shehu Dikko, who stood in for Pinnick (who is already in Morocco), thanked President Muhammadu Buhari for his usual strong support for the NFF and Nigerian Football generally since coming into office, and assured that once victorious, Pinnick would continue in his usual way of influencing the appointment of Nigerians into FIFA and CAF committees and administrations, as he did while he was 1st Vice President of CAF and has been doing as Member, CAF Executive Committee and Member, Organizing Committee for FIFA Competitions.

“As a FIFA Council Member, Pinnick will also be automatically a Member of the CAF Executive, which gives Nigeria a voice at both global and continental levels. This is not a Pinnick project, but a Nigeria project. If countries like Guinea and Madagascar can have people in the FIFA Council, there is no reason why a big football –playing nation like Nigeria should not.”

President of the Nigeria Olympic Committee, Enginner Habu Ahmed Gumel, gave a thumbs-up to Pinnick’s candidacy, saying “the FIFA Council seat is important to us, Nigeria and Africa, and we enjoin all Nigerian football stakeholders to be loud in their support for Pinnick.”

NFF General Secretary, Dr Mohammed Sanusi enjoined all football stakeholders to join hands with the Federal Government, the Federal Ministry of Youth and Sports and the NFF to give Pinnick strong support in his bid for the FIFA Council seat.

UEFA Champions League 2022: Who will wear the crown?