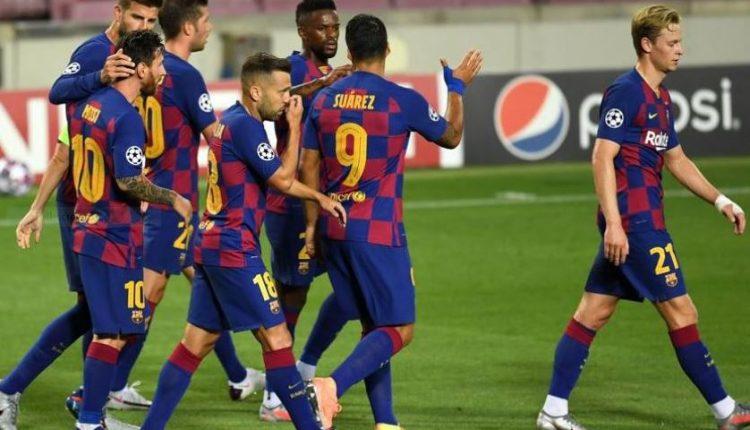 Bundesliga champions, Bayern Munich and LaLiga side Barcelona booked their place in the last eight of the Uefa Champions league.

Bayern cruised past Premiership side Chelsea 4-1 on Saturday, gaining them a place in the Champions League quarterfinals with a 7-1 aggregate.

Bayern will be joined in the last eight by Barcelona, who trashed Napoli at home 3-1.

Bayern will be on an 18-game winning streak across all competitions as they head into next week’s Final Eight tournament in Lisbon.

Polish striker Lewandowski, with 53 goals in 44 matches in all competitions this season, turned provider to set up Ivan Perisic in the 24th minute as the hosts showed no lack of fitness despite a five-week gap since their last competitive game.

Chelsea, who conceded seven goals in a two-legged European tie for the first time, got onto the scoresheet with Tammy Abraham’s tap-in from a Manuel Neuer pass a minute before the break.

Messi led Barcelona to a 3-1 win at home to Napoli on Saturday for a 4-2 aggregate victory which took the club into the Champions League quarter-finals for the 13th consecutive season where they face Bayern Munich.

The Catalans had a shaky start but took the lead in the 10th minute with a powerful header from a corner by Clement Lenglet before Messi scored a superb second in the 23rd, seeing off four defenders to curl the ball into the far bottom corner.

Messi had the ball in the net again soon after following a superb team move but the goal was harshly ruled out for handball by the Argentine following a VAR review, although Messi later won a penalty which Luis Suarez converted for Barcelona’s third.

Napoli got one back when Lorenzo Insigne converted a spot kick at the end of the first half and were the better side after the interval but Barcelona survived to set up a mouth-watering clash with Bayern in the Final Eight tournament in Lisbon next Friday.