These charts show why investors prefer Egypt to Nigeria 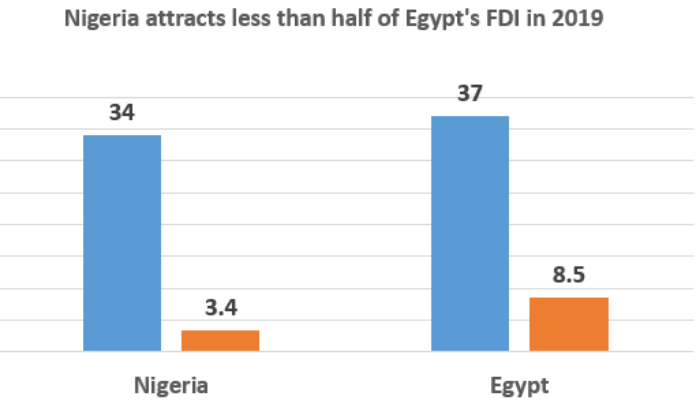 Egypt has continued to distinguish itself from Nigeria in the eyes of foreign investors for reasons ranging from foreign exchange liquidity to economic growth rate and inflation.

For foreign portfolio investors, foreign exchange liquidity is the latest reason why Nigeria is being sidestepped in favour of Egypt. 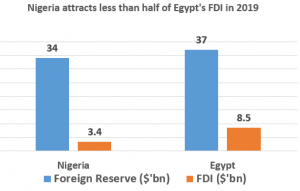 Although both countries are facing dollar liquidity challenges amid the Coronavirus pandemic, foreign portfolio investors say it is easier to move money in and out of Egypt than it is in Nigeria.

“In Nigeria, there’s a near $1billion worth of trapped funds due to the dollar scarcity and the CBN is somewhat suppressing demand as a result,” one investor told Business day. 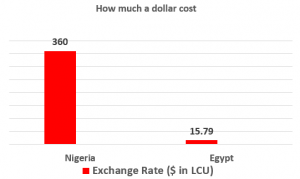 “Nigeria’s challenge is not unique but the situation is more bearable in Egypt which has more economic indicators going for it than Nigeria,” the investor said on condition of anonymity.

For the more crucial foreign direct investors, Nigeria’s appeal is less than Egypt due to slower economic growth, faster inflation rate and a much lower ease of doing business.

While Nigeria is said to be Africa’s most promising economy given its huge market and the abundance of resources, offshore investors are taking their patient capital to Egypt, making the North African country the hotspot for FDI on the continent. 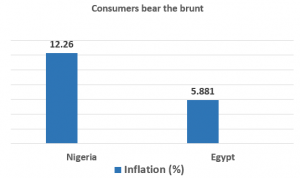 Last year, Nigeria with an inflow of $3.4bn barely got half of the FDI receipt Egypt had ($8.5bn), according to data from UNCTAD, the main U.N. body dealing with trade, investment and development issues.

After the oil crash of 2016, Egypt undertook structural reforms that have moved the economy to a more market-oriented one. Under the auspices of IMF, the country embarked on a three-year reform programme and the results (as shown in the charts below) has seen stronger FDI inflows compared to peers.

Among other things, Egypt took steps to keep public debt on a downward trajectory, phased out subsidies on most fuel products as part of the IMF-backed economic reform programme and freed up fiscal space for social spending. 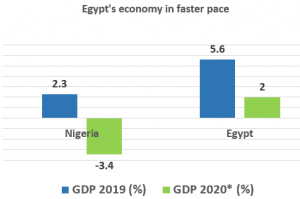 According to Egypt’s petroleum minister, the country’s spending on fuel subsidies dropped by about 65 percent to 21 billion Egyptian pounds ($1.34 billion) in July-March.

These steps improved the perception of Egypt in the eyes of foreign investors.

Notably, floating the Egyptian pound has helped the country attract foreign flows into its economy via the oil and gas sector, while major investments have been in telecommunications, real estate and tourism.

Today the dollar exchanges for 15.79 Egyptian pound while the Naira at N360/$ is said to be still too strong.

The Central Bank on Sunday promised an orderly exit for investors repatriating capital but the naira non-deliverable forward contracts are showing signs of currency pressure with 5-year contracts above N500.

Another clear distinction between both economies is seen in their respective central banks’ firepower. For Nigeria’s more rigid currency regime, the CBN has $34bn while Egyptian counterparts have $37bn.

The availability of dollars for Egypt has helped ease pressure on consumer prices which has fallen from over 20 percent to just 5.881 percent while Nigeria’s inflation at 12.26 percent is moving further from CBN’s preferred maximum of 9 percent, according to latest data.

Egypt’s economy as a result of some of the fiscal, monetary reforms including privatization of assets, has led to its fast growth and the resilience of its economy.

Compared to Nigeria’s 2.3 percent, Egyptian economy grew by 5.6 percent for their respective 2019 fiscal year, while IMF says the country’s economy would expand 2 percent in 2020 and Nigeria’s would contract 3.4 percent due to the COVID-19 effects.