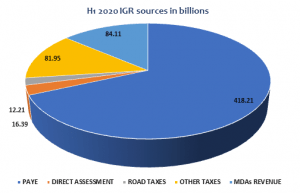 Source: NBS, BRIU
Insight from the IGR data published by the National Bureau of Statistics (NBS) revealed that the drop in IGR between Q1 and Q2 2020 was driven by a decline in the revenue generated from MDAs and total taxes (23.68 per cent), except from the revenue from other taxes which was up by 3.84 per cent within the period. While revenue from MDAs dropped by 42.05 per cent, revenue from PAYE (27.03 per cent), direct assessment (41.84 per cent) and road taxes (37.95 per cent) all dropped significantly within the period.

The decline recorded in H1 2020 was partly a reflection of the COVID-19 pandemic which necessitated the lockdown in many states between April and May, that is, the beginning of Q2 2020. Only 11 states recorded growth in IGR between Q1 and Q2 2020, with Gombe recording the highest growth (142.6 per cent); compared to 30 states including the FCT that recorded growth between Q4 2019 and Q1 2020.

Source: NBS, BRIU
Further, the decline in total tax collection could be premised on the reduction of income level during the widespread pandemic resulting from pay cut and job losses, which consequently affected disposable income of an average working class as it necessitated many to save than to spend.
From the revenue generated through taxes between January and June 2020, 79.09 per cent was generated via PAYE, 3.10 per cent from direct assessment, 2.31 per cent from road taxes, while the revenue from other taxes represent 15.05 per cent of the total tax revenue.
Lagos State recorded the highest IGR with N204.51 billion realized in H1 2020. The top 4 states trailing Lagos are Rivers with N64.59 billion; FCT, N35.21 billion; Delta, N30.84 billion and Ogun State which recorded N23.68 billion for H1 2020. The IGR of Lagos State alone constituted 33.37 per cent of the total IGR of the 36 states and FCT. More explicitly, the IGR from Lagos alone in H1 2020 is more than the combined IGR of 29 states except for the remaining six states: Rivers, Delta, Ogun, Oyo, Kano, Akwa Ibom and the FCT.
On the contrary, Jigawa State recorded the lowest IGR in H1 2020 to the tune of N3 billion, closely followed by Ekiti, Adamawa, Gombe and Yobe, each with an IGR that is lower than N4 billion. 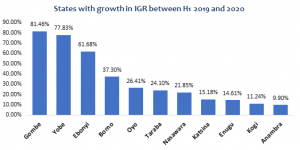 Source: NBS, BRIU
To assess the level of dependency of the states on the Federation Accounts Allocation Committee (FAAC) from the federal government to meet their recurrent expenditure, the half-year viability index was benchmarked at an average of 50 per cent as it makes sense for state governments to generate half of all that is needed to run its economy within their states.
Against the 50 per cent threshold viability index, the viable states in Nigeria are Ogun (57.75 per cent), FCT (51.58 per cent) and Lagos with 80.34 per cent; while the remaining 34 states fell below the threshold.
While the viable states, especially Lagos, can run its state affairs with little or no support from the federal government, the remaining states proved that without the monthly disbursement from the FAAC, they remain unviable and cannot survive without the revenue from the federal government, mostly from the oil sector. And therefore, a drop in oil price ripples adversely in the economy.

The viability index further revealed that 15 states are worst hit as their Internally Generated Revenues (IGR) within the period under review was far below 20 per cent of their receipts from the Federation Account Allocations (FAA) in the reviewed period.
The decline in revenue has caused most of the 36 states of the federation to rely majorly on federal allocations to meet up with their government expenditures. According to the IGR data, 34 out of the 36 states rely more on monthly allocations from the federal purse, with the exemption of Lagos, Ogun, and the Federal Capital Territory.
It is therefore pertinent for the various state governments to brace up and adopt strategies by aggressively devising means of generating revenue internally, rather than relying on the monthly federal revenues that come largely from the oil sector that is very volatile.