Behind every great movie are crew members, an amazing script, and production companies that put an abundance of work into ensuring the movie emerges amazing for viewers to watch and enjoy. Nollywood, Nigeria’s greatest film industry and the second biggest film industry worldwide, churns out roughly 50 English and indigenous Nigerian language movies per week. The number of movies produced by Nollywood varies yearly due to certain factors that may either cause an increase or a decrease in the production of movies.

According to the National Bureau of Statistics (NBS), the total number of Nollywood movies produced in 2017 was 450. It increased to 565 in 2018, 700 in 2019, and despite the COVID-19 pandemic in 2020, it was the year with the highest production of movies at 2599, were produced relative to the previous years. Between 2017 and 2020, movie production increased by 478 percent when measured in terms of number of movies produced.

The COVID-19 halted so many activities, including movie production. So, what was the cause for the high rate of movie production in a pandemic year? Most movies are filmed long before they are produced. It could be possible that some of these movies were filmed earlier before the pandemic broke out and suspended till after the nationwide lockdown, or continued during the pandemic with social distancing rules which resulted in the increase of production cost of movies.

The high production of movies may also be attributed to the fact that production companies knew their audience would have more time to watch the movies during the lockdown, therefore gaining a lot of more viewers. Those who never had time to watch movies were interested in knowing what the latest movies were and those who never liked to watch movies were forced to watch it anytime boredom hit them to the extreme. Films were produced online on platforms like Iroko and Netflix, making it easier to just watch at the comfort of homes. Prior to the pandemic, most movies were usually first released to cinemas before being made available for download and streaming on various online movie platforms. 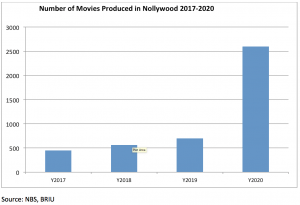 Watching movies, at that time, was the only way to take one’s mind off the sad reality that people were being wiped away by a pandemic, and make them see positivity in life, which explains why more comedy hits like “Who’s the boss”, “Fate of Alakada: The Party Planner”, “Quam’s Money”, “Omo Ghetto: The Saga” and dramas like “Citation” and “Mama drama” were produced.

The NBS data on Nollywood movie production from 2017-2021 shows the statistics of states with the most produced movies for the first quarter of 2021. Lagos is first with the highest at 149 movies; Onitsha is second with 140 movies, Abuja with 107 movies, Port-Harcourt with 12 movies, Kano with 4 and Benin and Bauchi with 2 movies each.

Lagos has the greatest movie infrastructures in Nigeria, hence the high production. It is the most populous state in Nigeria and is a hub for anything entertainment related. It is home to cinemas such as Genesis Deluxe Cinema, Silverbird Cinema, Ozone Cinema, IMAX Filmhouse Cinema and Surulere Filmhouse cinema. It is also home to the largest theatre in Nigeria, National Theatre in Iganmu. Movies are most watched in Lagos State and this has influenced the reason for the high rate of movie production in the state.

Onitsha, as a city in Anambra State, serves as a major commercial hub in South East. It is one of the largest markets in Nigeria which has people trooping in to purchase goods because of its vast availability of goods. The city has huge population and it is home to the famous Rainbow Cinema and other kinds of cinemas. This could explain why it is the second highest in movie production.

Abuja, the country’s capital, has well-built infrastructures. There are a lot of cinemas in the FCT, such as The Silverbird Galleria, Genesis Deluxe Cinemas, Sunset Drive, Nilabam Pictures, Tochsmileout Movie Theatre, J Cinemas and Africa Free Press. The common thing about these three states is their well-structured movie infrastructures which enables a large number of people to watch movies comfortably.

To produce a movie in Nigeria costs about an average of N1.2 million to N10 million, depending on the quality, the target audience and the platform to premiere it to the world. The production of a movie is not the only thing involved in the cost indicated above. It has to be broken down to include other things that will make the movie become a reality. The budget of a movie production would include payment and licensing of the screenplay, salaries of the actors and actresses (the pay is more when the actor or actress is a celebrity in the movie industry), payment for the set, videographer, continuity, directors, producers, and these take up a large portion of the budget, and finally, the marketers and distributors.

In 2017, about N4.3 billion was generated in movie production to the Gross Domestic Profit (GDP) of Nigeria. In 2018, the movie industry contributed close to N270 billion and in 2019, it contributed N87 billion. It has been estimated that by 2022 it would have increased to about N6.4 billion.
English Nollywood movies generate more revenues than other indigenous Nigerian language movies. Reason being that, English is a universal language and is easily understood by many, hence its larger market. Recent Nigerian movies focus on bringing in the cultures of other countries, so it can be best relatable. Yoruba, Igbo and Hausa movies are watched by Nigerians abroad to teach their children about the language and culture of their land.

“English movies have larger audience than movies produced in indigenous languages because many Africans watch them. Those produced in indigenous languages are limited to the markets where such languages are spoken. That is why actors and actresses in English movies such as Genevieve, Sola Sobowale, are well paid. In the Yoruba movie industry, Odunlade Adekola is the highest paid actor presently”, an actress who did not want her name in print said.

Furthermore, there is nothing great that has not encountered some challenges. One of the challenges Nollywood movies have encountered in the production of movies is the lack of technologies for special effects or stunts. Unlike Hollywood and Bollywood that invest a lot into technology or have all these technologies at standby, Nollywood lacks in that area and it would cost a whole lot more in the production budget to get one of more of these technologies. This is why some Nollywood movies produced end up being of low-budget.

Despite this challenge, Nigeria’s Nollywood has grown worldwide and movies are now distributed and watched by people in other African countries and not Nigerians alone. This has an influence on Africa as a whole because each Nigerian movie tells a moral lesson about social conscience which one learns from and other African countries also learn about our culture.

According to Femi Gbajabiamila, the Speaker of the House of Representatives, Nollywood is a major contribution to the arts, recreational and entertainment sector of the country’s GDP at N239 billion, which is 2.3 percent, due to the large number of movies production every year. Nollywood is not just about entertainment but also one of the greatest revenue generators for Nigeria.
Attachments area

Traveling this Summer? You Need to Do it Like My Friend Amaka.