Despite the laudable progress made in rice production, Nigeria is still the largest importer of rice in Africa. Based on the available data from the United States Department of Agriculture (USDA) in 2018, Nigeria is the largest producer of rice in Africa with a production quantity of 6 million metric tonnes (Mt) of paddy rice while milled production amounts to the tune of 3.7 million metric tonnes (Mt).

The decline in Egypt’s production can also be attributed to a significant decline in the total area were rice was harvested, which could mean that much efforts were not directed to production as it were in the previous year. The total harvested area of rice in Egypt reduced by 22.83 per cent from 762 thousand hectares (ha) of land in 2017 to 588 thousand ha in 2018. 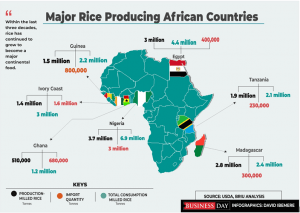 From the analyses above, even though other factors may have contributed to the decline in Egypt’s production, we cannot ignore the fact that the significant decline in the harvested area is also a major contributor.

RMBNS’ economic outlook for 2020: some growth, but not enough