Economic activities in the 36 states and FCT appear to be picking up following a noticeable growth in voice and internet subscriptions in the last twelve months. The non-pharmaceutical measures such as lockdown and social distancing implemented last year pushed some individuals and firms online. Many private organisations and government agencies implemented work at home policy. While majority have resumed to their work places, some organisations are still implementing that policy. 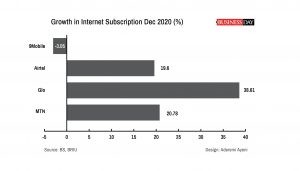 The current administration in Edo State has implemented programs aimed at boosting internet usage in the state. One of such programs is the Edo Jobs which is a portal for connecting unemployed youths in the state with employers of labour. As a digital platform, only those with active voice and data services could benefit from the information released on the portal. At the end of the first term in office, Edo Jobs facilitated the placement of 156,994 unemployed youths with different organisations. If you are an unemployed in Edo State, you will look for ways to get your active voice line so that you do not miss out when employment opportunities are announced on the platform.

Another factor was the election that took place in the state last year. The electioneering period was laced with tensions, brickbats, which made social media platforms the battle fields as information that was true, untrue and outright lies inundated the social media space. And no one wanted to be left out.
‘’The government of Edo State has done so much in connecting the rural communities. Consequently, everyone is now willing to have voice and data subscriptions. Again, election was held last year, in which every eligible voter actively participated through calls, sharing messages, videos and other information ensuring that the current administration was re-elelcted”, said Ukinebo Dare, head, Edo Jobs. 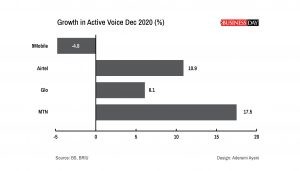 The Federal Capital Territory (FCT) Abuja witnessed 58 percent growth in voice subscription from 5.70 million as of December 2019 to 9 million in December 2020. In other words, additional 3.30 million active lines came on board in 2020 in Abuja. A likely reason for this development is the migration of Nigerians from North West and North East to the FCT following renewed onslaught on people by bandits and insurgents.

Benue State recorded 50.5 percent growth in voice subscription as 1.69 million active additional lines came on stream. This could be interpreted as the gradual restoration of peace in the food basket of the federation. Delta State was in the news for good as 2.21 million lines were added to 4.7 million lines as at December 2019 to have 6.91 million active lines as at December 2020, representing an increase of 47.14 percent.
Others in the top ten highest growth states included Yobe, 34.7 percent; Zamfara, 34.7 percent; Sokoto, 28.2 percent; Anambra, 24.1 percent; Gombe, 21.4 percent and Katsina, 19.9 percent.

Interestingly, no Nigerian state recorded a negative growth rate in internet subscription in 2020. The highest growth rates were in Yobe, Sokoto and Zamfara which grew by 49.12 percent, 45.93 percent and 37.93 percent respectively whereas the least growth states in internet subscription was in Rivers, Lagos and Abia at 15.54 percent, 13.68 percent and 12.59 percent in that order.

When internet subscriptions are evaluated by concentration, the top ten states which are Lagos, Kano, Ogun, Oyo, FCT, Kaduna, Rivers, Delta, Edo and Niger cumulatively had 80.3 million lines in 2020 as against 66.6 million lines in 2019. Consequently, their share of the total internet subscriptions in the country fell to 52 percent in 2020 unlike in 2019 when they controlled 53 percent of the country’s total.

Airtel Africa’s nine month revenue ended December 31, 2020 was up by 14 percent to $1.13 billion from $995 million in the corresponding period in 2019. Voice revenue grew by 7 percent while data revenue rose by 25 percent. Other revenue increased by 17 percent during the period.