Agriculture remains the base of the Nigerian economy, providing the main source of livelihood for most Nigerians. The sector has faced many challenges in recent times hitherto; some of which are the border closure, insecurity, and the foreign exchange (FX) components amidst the global pandemic. Further, the growing inflation of the prices of most food items in the market across the 36 states in Nigeria including the Federal Capital Territory (FCT) reduced consumer purchasing power and may as well keep the nation in recession in Q4 2020, as the common man is withholding cash even as the festive period approaches.
In the third quarter (Q3) of 2020, the agriculture sector contributed 30.77 per cent (28.41 per cent) to the real (nominal) Gross Domestic Product (GDP) of the country, representing 1.39 per cent (13.52 per cent) increase from the corresponding quarter of 2019 and 39.95 per cent (36.45 per cent) increase from the previous quarter.

On a year-on-year basis (YoY), three of the sub-sectors recorded growth in real terms in Q3 2020: crop production (1.38 per cent), livestock (2.29 per cent) and forestry (2.55 per cent) while fishing dropped by 2.07 per cent. Further, YoY growth pattern showed that while crop production has been on the decline since Q4 2019 and growth in fishing nose-dived into the negative territory following the recession, there has been positive growth in livestock compared to forestry which recorded positive growth between Q2 and Q3 2020.

Source: NBS, BRIU
Another staple that is quite affordable for a low-income earner in Nigeria is garri. The cost of garri was not in any way exempted from the inflationary trend. Yellow garri was observed to be more expensive than white garri. However, the price of both white and yellow garri had increased by 50.82 per cent and 56.3 per cent respectively in October 202o compared to the same month last year, while it increased by 3.90 per cent and 4.34 per cent month-on-month. This means that the naira value that can buy a bag of garri last year can only purchase half a bag in October 2020.
Among the states, Rivers State recorded the highest price of white garri at N390.60 while white garri is sold cheapest in Ondo at the price of N150.10. For yellow garri, the prices are highest in Akwa-Ibom at the rate of N400.17, while Katsina recorded the least price at N183.82. 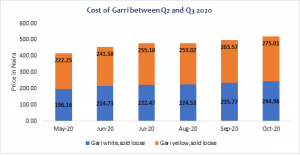 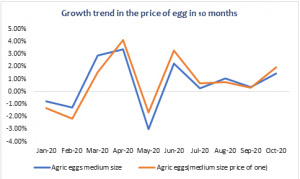 Source: NBS, BRIU
The price of groundnut oil was also seen to be affected by inflation in Nigeria with a YoY and MoM increase of 14.83 per cent and 2 per cent respectively in October 2020. Amongst the states including the FCT, Kebbi State recorded the least price of one bottle of groundnut oil at N444.93 compared to Delta State with the highest price of N1000.20.
Amongst other factors that caused inflation in the prices of food stuffs, salient among them which have greatly led to the inflation are insecurity and border closure. If considerate measures are not put in place by the government to curtail the incessant inflation, most people may not be able to afford some food items especially the essential ones in the last quarter of 2020.