Digitisation has started to have a positive impact on Company Income Tax (CIT) collection in Nigeria, with the share of CIT collected through E-transact, E-tax pay and Remitta (GIFMIS) platforms sustaining an upward movement in five years.

Collectively, the CIT collected through those aforementioned platforms are regarded as Other Payments, and their share in total CIT receipts rose from 3.8 percent in 2016 when it was just N38.4 billion to 16.9 percent or N238.09 billion in 2020. 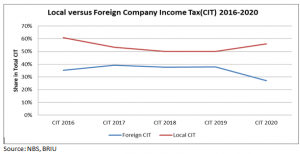 According to NBS, foreign payments are the bulk payments from JP Morgan account which cannot be attributed to their offices or sectors while Other Payments are payment made through E-transact, E-tax pay, and remitta (GIFMIS).

On which enterprises pay Other CIT Payments, the NBS said those are companies that pay minimal CIT and whose individual payments are too low to be captured separately.
“Other payments refer to payments by small enterprises.

They are so many and their individual payments are very negligible. We usually group them together as other payments for ease of administration”, Sunday Ichedi, head, Public Affairs & International Relation Unit at NBS, said.

Another impact of digitisation manifested in the increase in the share of local CIT in 2020 the year of the pandemic and that was the first time in four years the local CIT share in total CIT would rise.

Another takeaway from the analysis of the CIT data from the National Bureau of Statistics (NBS) is that there has been a constituent rise in the share of the revenue generated from other CIT Payments, mostly from enterprises operating in the informal sector.

Consequently, when the share of Other CIT payment is added to local CIT payments, the combined revenue generated internally in Nigeria from those two sources amounted to 60.8 percent of the total CIT in 2017; 62.2 percent each in 2018 and 2019, before it increased to 73 percent in 2020. 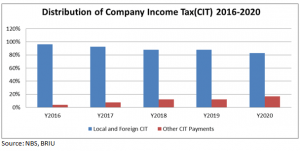 The local CIT varies from sector to sector, with the contributions of some sectors indicating that not many economic activities going on there. The telecommunications sector remains the dominant sector when measured in terms of company income tax (CIT). That subsector paid the most CIT, which amounted to N180.26 billion in 2020, an improvement over N177.74 billion paid by players in that sub-sector in 2019.

Consequently, the combined weight of the four most paying CIT sectors-telecoms, banking and financial institutions, other manufacturing, and commercial and trading amounted to 31.61 percent in 2020.

That telecoms sector paid the highest CIT should not come as a surprise because its sectoral GDP share in the total GDP has been on the rise in recent years, from 8.66 percent in 2017 to 12.2 percent in 2020.

On the other hand, the agricultural sector which has consistently accounted for about 25 percent of Nigeria’s gross domestic product (GDP) accounted for just N27.01 billion of the local CIT, which is 0.4 percent of the total CIT payments in the country during the 5-year period. In 2020, only N5.9 billion was generated as CIT from the agricultural sector.

On why the CIT payment from the agricultural sector was very low, a senior analyst attributed it to the large informal sector, enjoyment of capital allowances, and pioneer status.
“There is a large informal sector in the agricultural sector. The low CIT may mean that some of the players within the value chain are not yet covered for tax payment. Another factor is that it takes a while for an agribusiness to be profitable. Some of them also enjoy a lot of incentives as well as they can claim pioneer status in some instances”, Olayinka Oluata, Senior Manager with Andersen Tax, said.

“The telecommunications sector is one of the few sectors that gained from the pandemic. While other sectors were grounded, their activities continued”, she added.

Another sector that has received significant investment in the building and construction sector, in view of the private sector investments, as well as state and federal government’s capital expenditure spending in the last few years. The funding has gone into rail rehabilitation, road construction and rehabilitation.

Other sectors with minimal CIT share in total CIT in 2020 include offshore operations, 0.28 percent; mining, 0.02 percent; conglomerates, 0.21 percent; gas, 0.49 percent; automobiles and assemblies, 0.23 percent; hotels and catering, 0.24 percent; petrochemical and petroleum refineries, 0.90 percent and properties and investments, 0.30 percent, among others.

From Nairobi to Abuja: Kenyan election as a mirror for Nigeria