Global trends in the Insurance Industry

The reality today is that most people go through life with the mind-set that the likelihood of risks prevalent around them is either minimal, negligible or wholly not in existence. Nevertheless, in a world with increasing risk of living and carrying out business activities, there is need to embrace insurance as a mechanism and/or a tool to stay afloat when catastrophic events strike. For businesses, it serves as a measure of financial security as it helps in avoiding permanent closure of business activities as a result of occurrence of certain insurable risks.

Risks whether negative or positive permeates our everyday activities. As a result, man has always been careful of whatever risks he is susceptible to as he carries out his daily undertakings. Risk—the  probability of damage, injury, liability, loss, or any other negative occurrence—is the variation between actual outcome and expected outcomes. Risk which could either be low or high is yet, a vital component of insurance. As Andrew Beattie puts it, “If risk is like a smouldering coal that may spark a fire at any moment, insurance is the fire extinguisher.”

Insurance on the other hand, which has been widely held to be as old as man, is simply a step taken to indemnify against risk, albeit a universally acceptable definition is not easy to come by.

The global insurance market recorded improved performance in 2017 compared to the corresponding year. The gradual global economic recovery from the torpid performance recorded in 2016 (especially in emerging market economies like Brazil and Russia) saw a moderate rise in non-life premiums in most countries in 2017 although the natural catastrophe in most countries (hurricanes in some US cities, earthquake in Mexico and wildfires etc.) has raised concerns of the likely impact on prices and by extension, profitability, according to Swiss Re Institute of Global Insurance Review in 2017 and outlook for 2018/19. 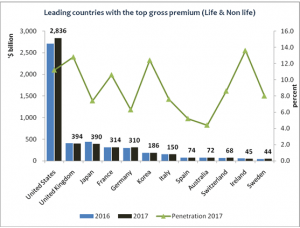 The degree of susceptibility of Asia countries to natural catastrophes ranging from monsoon, landslide, flooding, etc. coupled with the low level of insurance penetration gives course to worry about. For instance, while the average insurance penetration rate in developed Asia stands at 2.4 per cent, that for India, Indonesia and the Philippines combined ranges from 0.5 per cent to 0.6 per cent with property insurance for emerging Asia recording 1.1 per cent slightly above that for Sub-Sahara Africa (SSA), based on the submission of Roland Eckl, Chief Executive, Asia-Pacific (Japan, India, Korea, and Southeast Asia) at Munich Re’s.

Notwithstanding, non-life insurance premium has continued to grow particularly in emerging Asia and also in Latin America amidst a favourable environment. In emerging Asia, premium growth in non-life insurance was 10 per cent in 2017, up from 8.7 per cent in 2016. Latin America and Sub-Saharan Africa recorded an uptick from a decline experienced in 2016 as a result of the recession caused by fall in commodity and oil prices. 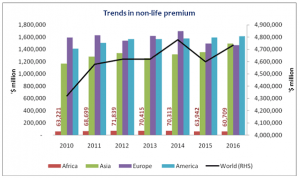 Emerging Asia is the main growth drivers in global life premiums with China alone accounting for 58 per cent of the total 76 per cent of emerging Asia’s contributions to emerging market’s life premium. Growth in life premium was also recorded across countries like India, Indonesia, Thailand, Malaysia, the Philippines and so on , attributed to various strategies ranging from the implementation of bancassurance, government policies, sales of unique products, etc.

Despite the fact that non-life insurance premium is expected to grow in 2018 and 2019 by 6 per cent to 7 per cent driven by activities in emerging markets, the low interest rate is equally expected to lower investment income which in turn could cause Return on Equity (ROE) to sink.

In Africa, insurance is still at a nascent stage as shown by relevant indices. Between 2010 and 2016, the continent’s average insurance penetration rates, insurance density rate and the gross premium written were 3 per cent, $60 and $67 million compared to the world’s value of 6.1 per cent, $625  and $4.6 trillion respectively. 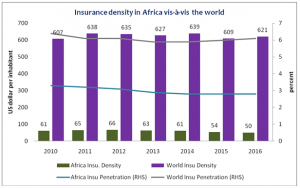 In 2016, the fall in the prices of commodities had adverse effect on the economy of Africa with major commodity exporting economies like Nigeria, Angola and South Africa recording a low GDP growth. The insurance sector was not spared in this crisis. However, Africa’s life premium grew from 1 per cent in 2016 to 2 per cent in 2017 linked to South Africa’s insurance market growth, the insurance premiums written in Sub-Saharan Africa (excluding South Africa) reached $10billion in 2016 bolstered by the non-life insurance segments which contributed 62 per cent to the total. Kenya and Nigeria were the only country that crossed $1 billion premium per annum.

Algeria, other peers leave Nigeria behind in chase for oil investment

RMBNS’ economic outlook for 2020: some growth, but not enough

RMBNS’ economic outlook for 2020: some growth, but not…