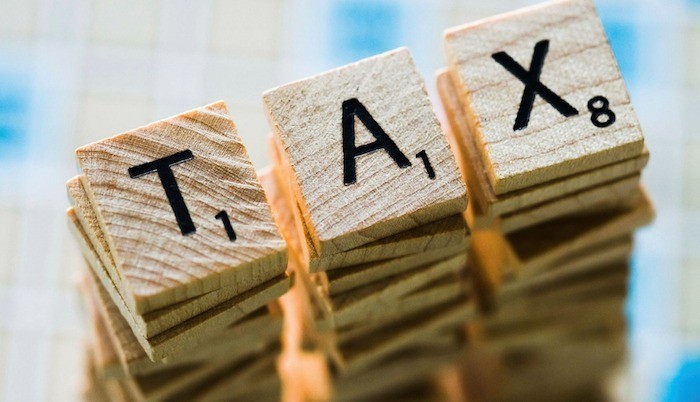 The Company Income Tax (CIT) is a type of tax paid on the profits of incorporated entities in Nigeria and it’s commonly referred to as ‘Corporate Tax’. Its contribution by companies to any economy globally cannot be overemphasized. Apart from the revenue function it performs for the government, it is also used to assist the national government to achieve the country’s macro-economic objectives in the areas of fiscal and monetary policies.

The Federal Inland Revenue Service (FIRS) is obligated by the Federal Government to realize it from companies who operate in Nigeria. According to the new law, (Finance Act 2020) companies have been categorized into three for the purpose of filing CIT – companies with an annual turnover of over N100 million will pay 30 per cent, those with annual turnover between N25 million and N100 million will pay 20 per cent and companies with less than N25 million turnover annually are currently exempted from filing CIT. However, no company is given a blanket exemption from paying taxes.

The full-year report showed that the top three sectors that generated the most CIT for the federal government are professional services (including telecoms), other manufacturing, and banks and financial institutions.

According to the data, the performance of the professional service sector in the year 2020 outshone 2019 as taxes remitted increased YoY but Q3, where it declined by 33.15 per cent from the previous year. Similarly, a quarterly comparative analysis puts growth in tax generation across the quarters in the red zone but in Q2—the sector recorded 121.79 per cent jump in CIT payment from N28.77 billion in Q1 to N63.80 billion in Q2 2020. 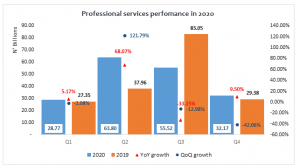 Source: NBS, BRIU
The other manufacturing sector remitted N100.37 billion in 2020. In comparison to the previous year, the sector recorded the highest YoY growth of 48.94 per cent in Q3, from N28.22 billion in 2019 to N42.03 billion in 2020 amidst other appreciations in Q1 and Q4. However, in Q2 2020, tax remittance decreased by 13.96 per cent from N21.57 billion from the previous year. The reason is not farfetched; the sector was affected by the lockdown around that period. 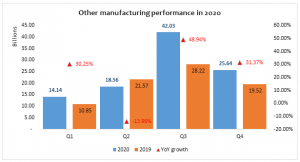 Source: NBS, BRIU
The value of tax payment by banks and financial institutions sector closely followed the other manufacturing sector to be the third-highest sector (with N96.36 billion) across all sectors in Nigeria in 2020. However, the data showed that the sector underperformed in comparison to the previous year with the highest decline in Q4 from N18.42 billion to N10.43 billion. The sector’s total corporate tax fell by 32.44 per cent from N142.69 billion in 2019 to N93.36 billion. 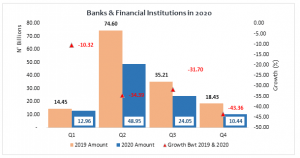 On the contrary, the full-year data showed that three sectors (mining, textile and garment industry, and local government council) generated the least corporate tax to the government’s purse in 2020. These sectors remained the least contributors even before the country experienced the coronavirus outbreak.

The mining sector generated the least CIT in Nigeria in 2020. Available data showed that between the quarters of 2019 and 2020 the sector only recorded a decline in Q2, a deep of 39.23 per cent from N68.21 million to N41.46 million. However, in the remaining quarters, the tax generated increased compared to the corresponding periods. Again, the lockdown effect, perhaps affected revenue, hence, the taxable income.

Although the textile and garment industry sector closely followed the mining industry with a gap of N16.75 million to be the second least CIT generating sector, everything seems green from the sector to the statutory agency, FIRS, with YoY increases in the tax remitted. It is among the few sectors that did not record any form of yearly decline from Q1 to Q4 within the review period.

Next to the textile and garment industry is the CIT from the Local Government Councils sector which CIT plunged by 21.06 per cent from N1.42 billion in 2019. Even though the sector is the third least in terms of tax generation, the total CIT combined from the mining and the ‘textile and garment industry’ represents 62.76 per cent of what was generated (N1.12 billion) as tax in the Local Government Councils sector.

The variation in the company income tax across various sectors in Nigeria is largely attributed to the adverse effect of COVID-19. Almost all the sectors experienced a decline in Q2 2020 YoY, a period where productivity was minimal, which of course brought the GDP figure to the negative territory.

While other sectors struggled to adapt in Q2 and realign to record a slight growth in Q3 2020, it was observed that the professional services sector (including telecoms) experienced the greatest spike in its CIT that quarter. This was majorly driven by the performance of the telecoms subsector, including technology, on which many other sectors rested on as a foothold to do business. It was the sector that coordinated other sectors during the pandemic.

Banks’ non-performing loans, PAT and others in Q3 2020

Products, commodities that will shape African trade as AFCFTA takes off