Nowadays, paid work is the main source of income for the vast majority of households across the world; hence, organisation of work can help to reinforce the core principles of equality, democracy, sustainability and social cohesion. With an estimated 7.74 billion people in the world, there is need to “promote sustained, inclusive and sustainable economic growth, full and productive employment and decent work for all”, Sustainable Development Goal (SDG) 8.

The number of workers living in extreme poverty has declined dramatically over two decades, despite the lasting impact of the 2008 economic crisis and global recession. However, as the global economy continues to recover, we are seeing slower growth, widening inequalities, and inadequate jobs to keep up with the growing population.

In developing countries, the middle class makes up more than 34 percent of the total employment—a number that has almost tripled between 1991 and 2015. The least developed countries experienced annual Gross Domestic Product (GDP) growth rate of less than 5 per cent over the past five years, which means they have fallen short of the SDG 8 target of at least 7 per cent growth per annum.

According to a report from the International Labour Organisation (ILO) 2019, the global gap in labour force participation rates between women and men stood at 27 percentage points in 2018. This is less than half of all the working-age women (48 per cent) that participated in the labour market; whereas, three-quarters of men (75 per cent) participated in the labour market in the same year.

The gender gap has been narrowing over two decades, mainly because the decline in the participation rate for women between 1993 and 2003 was much smaller than that for men.

Across the countries in 2018, there have been deficits of decent work as many took up unappealing jobs that were characterized by low pay, even as they experienced financial dissatisfaction, financial stress, unequal opportunities, financial insecurity, subjective economic well-being, substandard living, dissatisfaction with material possessions, economic deprivation, and economic insecurity, among others.

The global working-age population from 15 years and older across gender was 5.7 billion in 2018—out of which 172 million people (5 per cent global employment rate)were unemployed and 3.3 billion people (57.89 per cent) were in employment. These figures added up to the tune of 3.5 billion global labour force which represents a labour force participation rate of 61.4 per cent.

The remaining 2.2 billion people (38.6 per cent) of working-age were outside the labour force. They include those engaged in education, unpaid care work and those in retirement. Within this group, 140 million people comprising 85 million women and 55 million men were categorised as potential labour force—people who are looking for a job but are not yet available to take up employment, or who are available but are not looking for a job.

No less than one quarter (1/4) of workers in low and middle-income countries lived in extreme or moderate poverty, 16 per cent were moderately poor and 74 per cent were categorised as “not poor”.

“In general, employment growth cannot persistently exceed labour force growth because otherwise, the employed population would eventually be larger than the labour force, which by definition is not possible”, according to the World Employment Social Outlook 2019. 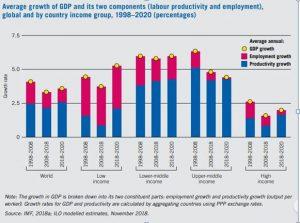 Labour market challenges vary across countries and regions despite the continued decrease in the global unemployment rate. Consequently, there is a need to achieve sustainable development through the fostering of production, innovation, and optimisation of resource efficiency, as well as prioritising the well-being of the less affluent.