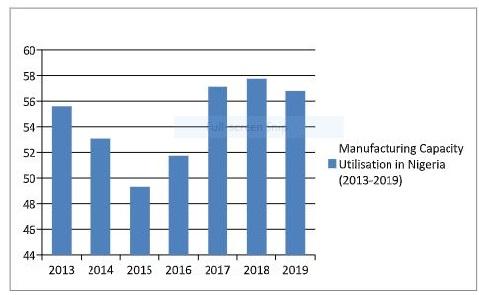 If the firm’s machines can produce 300 pairs of shoes but it only makes 230 pairs, say in one year, it means that the company’s utilisation is 230/300, which, when expressed in percentage, gives 77 percent. Capacity utilisation often applies to firms because the quantity of their output can easily be known and calculated. But it also applies to countries. Inefficient countries like Nigeria that do not realise their capacities in many sectors often have low capacity utilisation.

In Nigeria’s manufacturing sector, which is the subject of the discourse, capacity utilisation in 2019 was 56.8 percent, according to the Manufacturers Association of Nigeria (MAN) Economic Review for the second half of 2019.

These are not just numbers, and consumers need to be worried when manufacturing capacities are low, experts say. Investopedia explains that capacity utilisation rate is important for assessing a company’s current operating efficiency, and it helps provide insight into cost structure in the short term or long term.

At 57 percent capacity utilisation of the Nigerian manufacturing sector, a lot of Nigerian consumers are spending much more buying Nigerian products.

Company XYZ illustrated above will be producing 171 pairs of shoes rather than 300. With N1 million set aside for production, a pair of shoes will now cost N5,847 rather than N3,333, meaning that the consumer may be forced to part with extra N2,513 for a pair. This means rising poverty among consumers.

“Consumers are becoming poorer any moment they spend on these products. It is a clarion call for the government to remove obstacles to manufacturing and come up with an industrial strategy, which is lacking at the moment,” he further said.

Solomon Okunade, a lecturer at the Department of Economics, Obafemi Awolowo University, in an empirical research, identified foreign exchange shortage, preference for foreign products, high cost of equipment and machinery, power failure and maintenance culture as some of the factors slowing the capacity utilisation of Nigeria’s manufacturing sector.

According to MAN, capacity utilisation in the sector averaged 56.8 percent in 2019, indicating 0.95 percentage point increase from 57.75 percent recorded in 2018.

“The decline in 2019 was attributed to reduction in the purchasing power of the populace on account of the increasing inflation rate experienced in the country particularly in the second half of the year,” MAN said in the Economic Review.

Nigerian manufacturers are self-generating 13,000 megawatts of power due to the unreliability of energy supplies from DisCos. Naira exchanges at N450/$ in the parallel market today as against N360/$ in February and mid-March. This means that manufacturers now spend more while importing their inputs. Apapa and Tin Can port roads have become a clog in the wheel of manufacturers as raw materials take time to arrive at factories and finished goods spend a lot of time before being exported. Logistics cost make up 20 to 30 percent of expenditure cost of manufacturers, according to key players. Manufacturers access funds at 20 to 30 percent rate at financial institutions, which they say is expensive. Banks expect them to return their loans in 12 months.

In a recent interview, Muda Yusuf, director-general of the Lagos Chamber of Commerce and Industry (LCCI), explained that Nigerian manufacturers were not competitive due to age-old issues such as high energy cost and high cost of doing business in the country.

After surviving a tough year, manufacturers remain optimistic for 2021

AfCFTA is here, but can Nigeria rise to the occasion?