The Nigerian government closed its border with Benin Republic on August 20, 2019, in order to curb rice and petrol smuggling. It was then a temporary measure codenamed ‘Ex-Swift Response’. But on October 14, the government extended this exercise to January 31, 2020.

The following day, Sabo Nanono, the newly appointed Minister of Agriculture in Nigeria, when reminded by journalists that the exercise could worsen hunger and create food scarcity in the country, responded that Nigeria was producing enough food to feed itself and send to neighbouring countries. He also claimed that there was no hunger in the country.

“We are producing enough to feed ourselves. I think there is no hunger in Nigeria; there could be inconveniences. When people talk about hunger in this government, I just laugh,” Nanono said.

The ministry’s data show that Nigeria is the largest producer of yam, with an output of 40 million metric tons per annum (MTPA). However, yam demand in the country is 60 million MTPA, leaving a gap of 20 million MTPA.

Similarly, the data say that national supply for Irish potato is 900,000 MTPA, but market demand in Nigeria is 8 million MTPA—opening a gap of 7.1 million MTPA.

The ministry’s data show that Nigeria produces 400,000 MTPA of wheat annually while demand is 4 million MTPA, opening a gap of 3.6million MTPA.

According to farmers, all the gaps are filled with imports.

“We import food from West African neighbours, but we also export some despite not being sufficient in any crop,” Ifeanyi Okeleke, chief executive of Kenfrancis Farms, who plays in the poultry and cassava industries, said.

The noise about rice

Muhammadu Buhari, Nigeria’s president, said on January 11 this year that his government’s ‘rice revolution’ had made Nigeria attain food sufficiency, especially in rice. Nanono, too, did not dispute his boss’ assertion. But facts contradict this position.

In 2018/19 data, the Ministry of Agriculture claims that Nigeria’s rice production has risen to 5.3 million MTPA, from less than 4 million MTPA before 2015.

It admits that local demand for rice is 7.2 million MTPA, reflecting a supply gap of 1.9 million MTPA.

The Rice Processors Association of Nigeria (RIPAN) confirmed to BusinessDay on November 20, 2019, that rice production as of that day was 5.1 million MTPA, leaving a supply gap of 2.1 million MTPA.

Earlier this year, the United States Department of Agriculture, in its report, put Nigeria’s milled rice capacity in 2018/2019 at 4.78 million MTPA, as against 4.66 million MTPA in 2017/2018. All of these contradict President Buhari’s statement on rice sufficiency.

Key players in the agriculture value chain say that Nigeria is yet to attain sufficiency on any crop this year.

“Agriculture is not child’s play. You have to plant, manure, harvest and process. These take time. We are not sufficient in any crop yet,” Ifeanyi Okeleke, earlier quoted, said.

Haminu Zaroyo, a farmer and food supplier in Kaduna State, said production in 2019 had been lower than 2018 levels because of critical issues in Northern Nigeria such as Boko Haram insurgency, herdsmen attacks and flood.

“Herdsmen have sacked more farmers this year than last year, based on our findings in the North-East and North-West and North-Central,” he said.

“I used to get 200 bags of maize every day from other farmers and supply to companies in the food and beverage industry, but I can’t even get 80 bags now. And the reason is that most farmers have left their farms because herdsmen invade their farms, allow cows to eat up crops and even kill anyone who protests,” he noted.

Aminu Goronyo, national president, Rice Farmers Association of Nigeria, said farmers had been ramping up rice production. But he was quick to admit that supply for rice in the country was less than the demand. 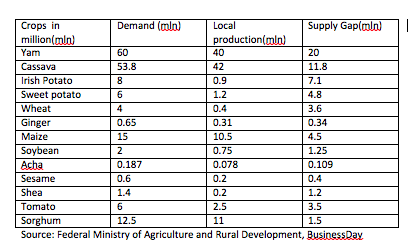 Rewane said high food prices in Nigeria indicated that the country was not producing enough food for a population growing at 2.6 percent every year.

“The price was around N15, 000 to N17,000 in July, but it has risen astronomically since the closure of Nigeria-Benin Republic border,” she said.

Data released by the National Bureau of Statistics (NBS) on October 19, 2019, showed that Nigeria’s inflation in October rose from 11.24 percent in September to 11.61 percent in October, 2019.

Food inflation rose to 14.09 percent in October, compared with 13.51 percent in September. Inflation is a measure of price increases in an economy over a period, economists say. The NBS admitted that increases in prices of meat, fish, vegetables, bread and cereals, potatoes, yam and other tubers within the month drove up the food inflation rate. However, it was silent on the impact of an increase in rice price on food inflation.

“Nigeria imports virtually every food item from crayfish to cereals through the Nigeria-Benin border, and given that they are not produced in sufficient quantity in the country now, any attempt to close the border will drive up the prices,” Ike Ibeabuchi, a manufacturer and chief executive of MD Services Limited, said.

Poverty capital with no hungry mouths?

The Minister also claimed that there was no poverty in Nigeria. But his claims are contradicted by surveys done by local and international organisations.

In June 2018, independent institutions World Poverty Clock and Brookings Institute said that Nigeria had replaced India as world poverty capital. Eighty-seven million people in the country, out of 200 million, now live on less than the extreme poverty benchmark of $1.90, their report said.

In July 2019, the United Nations Development Programme (UNDP) and the Oxford Poverty and Human Development Initiative released the Global Multidimensional Poverty Index (MPI). The report showed that 98 million Nigerians lived in multidimensional poverty. This means that they cannot afford good education, healthcare, food and are exposed to the threat of violence, living in areas that are environmentally harmful, an expert definition says.

The report said 5.3 Nigerians faced food crisis or hunger in 2018.

“At the peak of the lean season, three million were acutely food insecure in the three north-eastern states affected by the Boko Haram insurgency in Nigeria where protracted conflict and mass displacement disrupted agriculture, trade, markets and livelihoods, and pushed up food prices,” the report said.

To help Minister Nanono appreciate the level and hunger in the country, I visited Makoko, a slum in Lagos, where make-shift houses are built on still water.

In this abandoned community in Lagos, people hop into canoes to reach their homes.

On top of water, a woman, burdened by five children, beckoned on an ‘egusi’ seller— to the excitement of one of her children. Egusi is a local soup cooked with ground melon seeds.

“Children here go to bed without food,” Fashina Daramola, who lives there, told me.

“They are often excited whenever they see food,” Daramila said.

“We are poor and hungry in this community—most times without food, electricity and without the good things in life,” he further said.

The everyday experiences of Nigerians in Makoko and many communities contradict Nanono’s view that there is no hunger in the country, particularly in the administration in which he serves.

Other data that show hunger increasing

“A lot of people are becoming increasingly jobless. A jobless man has no food or any good thing in life. So, he is hungry,” said Ike Ibeabuchi, who was earlier quoted.

Steve Hanke, a professor of Applied Economics at Johns Hopkins University in the United States, released his Misery Index in 2018. He used critical indices such as unemployment, inflation and bank lending rates, in ranking countries in his index.

He ranked Nigeria as the 6th most miserable nation in the world with a misery index score of 43.0.

Minister Nano’s assertion on Nigeria’s food sufficiency is not supported by any fact. All data contradict his position. Also, his assumption that there is no hunger in Nigeria is wide of the mark, as all indices point to increase in unemployment and poverty in Nigeria, especially since the administration in which he serves came to power in 2015.