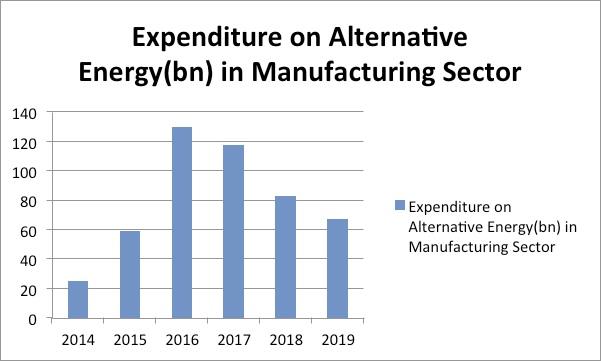 Cost of alternative sources of energy incurred by members of the Manufacturers Association of Nigeria (MAN) dropped from N82.6 billion in 2018 to N67.38 billion in 2019, signifying an 18.4 percent decrease over the period, data from MAN say.

This is an indication that power supply from electricity distribution companies (DisCos) to industrial clusters improved in 2019.

“In recent times, particularly with the privatisation of the power sector, more attention has been given to   electricity supply to the industry, leading to marginal improvement in the country in terms of hourly supply and number of outage per day,” MAN says, while explaining the cause of the 2019 decline in alternative energy spend.

”Since the first half of 2018, electricity supply from the distribution companies to the sector has stabilised at 10 hours per day on the average just as power outage stabilised at 3 times daily,” MAN further says.

The association further explains that reduction in power outages means improvement in electricity supply to the sector.

Thirty to 40 percent of manufacturing expenditure goes to energy sourcing. The sector’s annual self-generating capacity is estimated at 13,223 megawatts, according to a 2015 survey undertaken by Adeola Adenikinju, professor of economics, funded by the European Union and German government.

“The importance of power to manufacturers cannot be overemphasised. For you to do any production, you need to run your plant and those plants need energy, which takes about 40 percent of our production cost and that is not good for our business, especially when you have to compete with imported products. Therefore everything we can, we must do to ensure we bring our costs down,” Reginald Odia, former chairman of Economic Policy Committee of MAN and CEO of Bennett Industries Limited, said in an interview with journalists in 2017 when the report was unveiled in Lagos.

MAN established a power development company in 2016 to improve energy supply in industrial clusters across the country.

Power has been a major challenge for households and firms in Nigeria for decades. Africa’s most populous country generates about 5,000 megawatts of power and distributes 2,000 to 3,000 for 200 million people and millions of firms. This is grossly inadequate, experts say.

Eighty million Nigerians living in 8000 villages across the country lacked access to electricity by 2017, Mac Cosgrove-Davies, World Bank global lead, Energy Access, said in Abuja in December of that year.

A new tariff hike, which was supposed to take effect in this month, has been postponed to the first quarter of 2021 due to COVID-19 pandemic ravaging many households and businesses. The tariff is targeted at removing electricity subsidy in order to make bills paid by consumers cost-reflective.

A 2016 PwC report entitled ‘Powering Nigeria for the Future’ said Nigeria’s per capita power consumption was then only 151 kWh per year, making it one of the lowest in the region and globally.

The report said based on ongoing projects then, the per capita power consumption in Nigeria could reach 433 kWh per year in 2025.

“Given the requirements of the economy and the population, there is a critical need to drive higher power availability, and we believe a stretch target of 982 kWh per year (6.5 times the current level) by 2025 is realistic. This is based on benchmarking with other growth markets, like Vietnam,” the PwC report further said.