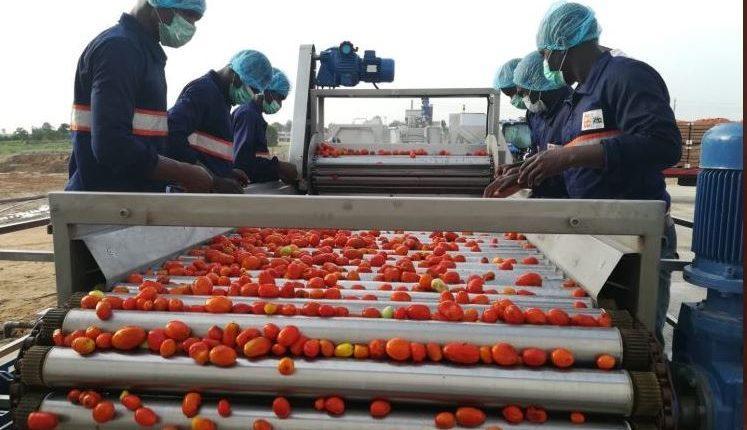 In 2019, Gbfoods – makers of Gino, Jago, and Bama products – set out to build a fully backward integrated tomato processing factory in Nigeria. The goal was simple: To build a factory that produces raw materials on the farm and then processes them within the same area.

Not only does this minimise the post-harvest loss, but it also guarantees a direct line of conversion from farm products to finished goods. Once harvested, the fresh tomatoes will be converted to tomato concentrate which GBfoods uses to make Gino Tomatoes Mix and Gino Tomatoes Pepper Onion.

The factory, located in Kebbi State, was completed in 2020 despite the impact of COVID-19. The most critical ingredient for a tomato farm is a constant water source. While conducting research, GBfoods explored several states with good arable land to find the most suitable location for the factory. Kebbi State emerged as the destination of choice. Not only did it have the land the company needed, but it also had an adequate water source from a river nearby. GBfoods says that the support from the Kebbi State Government, the Emir of Yauri, and the Central Bank of Nigeria was crucial to the success of the factory.

As construction of the factory progressed, the world was hit by the Coronavirus (COVID-19) pandemic. Countries shut down their borders and several cities in Nigeria and globally were locked down for health and safety reasons. To cope with the pandemic and any concerns it raised, GBfoods immediately put in place all safety measures required by global health standards. The team on site operated within a closed ecosystem that allowed no outsiders. All staff working and staying on site were tested regularly, not just for COVID-19 symptoms but also for other tropical diseases (like malaria, typhoid, hepatitis, among others). The company provided its staff with personal protective equipment (PPE) and had their vital signs checked daily. The resident nurse on-site also monitored their health regularly.

However, the domestic production of tomato is at 1.3 million tonnes (after factoring in tomato wastage along the value chain). There is not enough to meet demand. To bridge the gap, Nigeria relied heavily on tomato paste importation in the past. This meant a significant loss of revenue and jobs for the country. Data show that the country imported tomato paste at an estimated cost of $360 million annually in 2016 and 2017. But things changed in 2017 as the federal government introduced a policy to boost the local production of tomatoes and set Nigeria up to be a major player on the global stage. Apart from increasing the local production of fresh tomatoes, the policy was also aimed at increasing the local production of tomato concentrates and reducing post-harvest losses. This set the stage for GBfoods to make history with the new tomato factory three years later.

Now with the factory in operation, over 1,000 jobs have been created, including 500 farming jobs, 150 factory jobs, and 150 construction jobs. The company says more jobs will be created upon expansion. Already, the project has impacted the lives and businesses of over 5,000 smallholder farmers in Kebbi State, according to the company. While building the factory, GBfoods also ensured the provision of amenities to support the host community, including the provision of clean water for cooking and drinking, even to communities nearby.

For GBfoods, this Factory presents an opportunity to increase local production of tomato products for sale and consumption. It also presents a long-term opportunity to export tomato concentrate to other markets, especially within ECOWAS. This sets Nigeria up for a much bigger role in the global market while improving the lives of its tomato farmers, boosting revenue, and diversifying the economy.

Nigeria is administratively over-governed, the Oronsaye report is not the solution