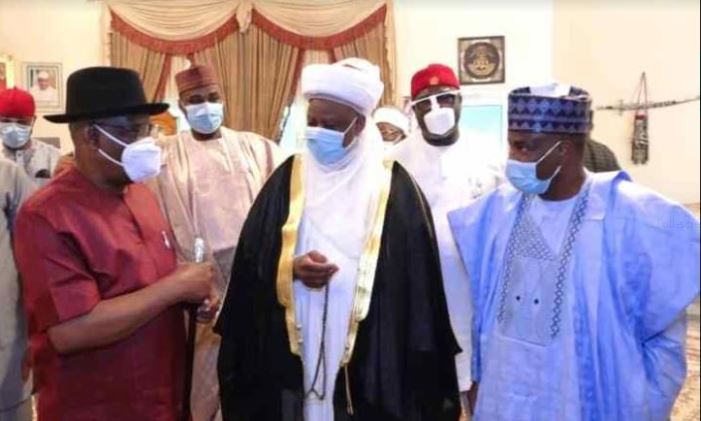 Governor Nyesom Wike may have since turned his back on the huge donation he made in Sokoto State and gone to other pressing matters of state but the ruckus has rather only started.

Tongues are wagging on the streets of Port Harcourt and fingers are tapping and clicking in the social media. Many have remembered that pensioners in the state have cried for over three years and that minimum wage issue in the state is still lingering.

Others have recalled that there has been no empowerment scheme of note in the state to absorb army of university graduates joining the unemployment market. Yet, many point to the collapse of most agro-ventures in the state such as the Rivers State Sustainable Development Agency (RSSDA), the Songhai Farms, the fish farm projects, banana plantation, the Etche farm project, etc.

Yet, many now wail over the harsh discontinuation of Rivers scholars abroad who wept and begged for years when the scholarship scheme was yanked off without allowing those already abroad to graduate.

They wonder why the state would donate N500million in times of economic downturn occasioned by the Coronavirus pandemic, while poverty was said to be striking hard at home.

The state government had on Wednesday, January 20, 2021, announced the pledge of N500million to support the Sokoto State government rebuild the Sokoto Central Market that was gutted by fire earlier on Tuesday. The governor wasted no time in rushing to Sokoto to help out.

According to a Rivers State Government House press statement issued by the Special Assistant on Media, Kelvin Ebiri, part of the money would also be used to support victims of the devastating fire that destroyed goods worth billions of naira.

Wike was said to have made the pledge on behalf of the state government during a visit to the Governor of Sokoto State, Aminu Waziri Tambuwal.

Wike, who was conducted round the destroyed market by Tambuwal said he was saddened by the devastating fire that razed down over 60 percent of the 16,000 shops there.

“When I got the information last night, I was touched and I said as brothers, what affects you affects us. What affects Sokoto State affects Rivers State,” he said.

He went on: “That there was no life lost; we give glory to the Almighty Allah. People have lost their goods; the state government will have to see how this market will be brought back to the way it is supposed to be.

He pledged that the government of Rivers State will support Sokoto State to rebuild the market and ameliorate the plight of the traders with N500 million.

“On behalf of the government and the people of Rivers State, we will support the Sokoto State government to see how quickly they can rebuild this market,” he added.

Governor Tambuwal thanked Governor Wike and the people of Rivers State for the kind gesture.

Governor Wike also paid a courtesy visit to the Sultan of Sokoto, Muhammad Sa’ad Abubakar in his palace to commiserate with him over the demise of junior brother, Hon. Abdulkadir Jeli Abubakar, who was Sokoto State Commissioner for Home Affairs.

In his response, Sultan Abubakar, acknowledged the age-long relationship between Sokoto and Rivers State and thanked Governor Wike for sustaining it. “You have just some few more years; please do much more so that nobody will beat you when he take over from you,” he said.

Reactions immediately exploded in the press and social media condemning the donation, but some persons supported the move.

Lekora Lezorgia said: “Which kind of talk be this? Charity begins at home, not this one he’s doing”.

Teka Loanyite: “Even President Buhari that is the Commander-In-Chief sympathised with Sokoto people without promising a dime. This time shall pass.”

Ikwut Friday stated: “Hunger is sweeping through the youths and you’re donating N500million, just like that.

Another source likened what the governor just did to someone whose children are languishing at home; but is busy sharing food to people outside, “Hypocritical benevolence indeed. Your children are dying of hunger at home and you are forming big boy, hosting everybody in the beer parlour.”

One Justus Ihunwo saw it as Sokoto getting their share of the N78.9bn (the FG just refunded Rivers State).

Support however, came Wike’s way. Adamu Usman Atabo who seems to come from Kogi State said: “Thank you very much Klem Nkem Ofuokwu. One does not have to wait to solve all his problems before giving. Also, whatever we give always returns to us in multiple.”

Condemnation trailed again as Remedy Bravo Kpenyie stated thus: “As the governor of the number one Christian State in Nigeria, magnanimity must always be the number one attribute.

“We all know that our governor bears the title ‘POS Africa’, this is why he doesn’t lack the spending/ dispensing ability. Our caring governor is a father to everyone, except the likes of the Ikoku 4, Sleek, School Boy, the Oyigbo people and coy who thought heaven will fall if he doesn’t listen to their cries. Governor Wike is truly the choice of Rivers People.”

A notable social media critic of the governor, Toke Kenneth Aledare, declared thus: “Oh my God! Have you so much degenerated in thought because of politics? Which ‘Donatus’ is that? Is that what governance is all about when your people are crying? Rivers State money is not his personal money, so he doesn’t have any right to spend one kobo on frivolity and gifts without people’s consent. Anyway, what do you expect from a state being governed by a rubber stamp legislature. No challenge whatsoever. No budget, you just wake up one day and start dishing out money like it’s running out of fashion.”

Royal Tams Fubby said: “This act didn’t start from him; it’s been a reoccurring thing, so why the noise? Until that spirit of vice presidency is cast out of that Brick House) Government House in PH), it’ll continue to be so. Nothing is wrong helping the needy whether same state or not, but not to the detriment of the needs of the citizens.”

The issue of right to spend came up when Alaiyi Bob-Manuel said: “The question we refuse to ask in Nigeria especially in Rivers State is; whose money is the governor donating?

“Are we in a democracy at all? Our governors donate our money to their cronies’ book launchings, give their god father’s grants to start private businesses, etc, because we allow them treat the state’s money as their own personal money and we thank them for sparing a little to do road for us.”

Many have raised questions about whether the 2021 budget provided such amount on donations or if such amount was also regarded as ‘Security Vote’. Others asked if the law passed by the state’s parliament many years back to protect then Governor Peter Odili who donated so much still protects this governor.

Wike’s many donations may provoke actions to limit amounts a governor may unilaterally donate without the House of Assembly approval before such pronouncements.

Mega amounts so far donated include:

4. N200m to a party agent/lecturer who died supervising elections for his party

5. N200m to Benue State to rebuild state after herdsmen attacks

6. N100m and more bounties on notorious killers such as Don Wanni