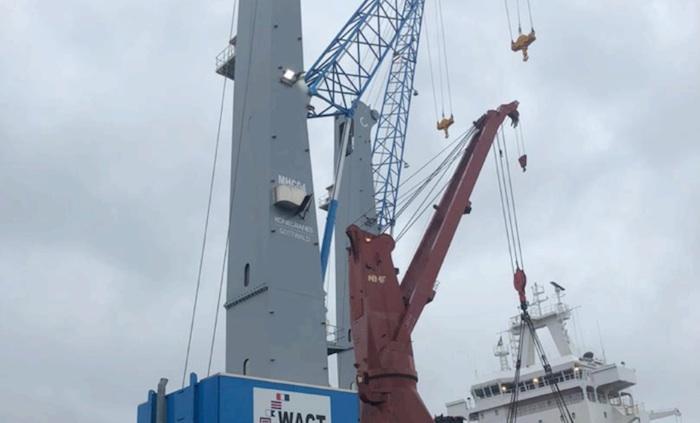 The West Africa Container Terminal (WACT) Onne, Nigeria’s leading container terminal in the Eastern part of the country, said it has received two more state-of-the-art Mobile Harbour Cranes (MHCs) and two 45 tons Reach Stackers, making the terminal one of the most equipped in the country.

The arrival of the latest set of MHCs brings the number of such cranes at the facility to four, a feat that is unmatched by any other terminal in Eastern Nigeria.

In 2019, WACT invested $14 million to acquire its first set of two MHCs and other sophisticated modern cargo handling equipment, including 14 Specialized Terminal Trucks and two Reach Stackers. Since then, it has consistently implemented its growth and development plan of becoming the most efficient container terminal in West Africa.

The upgrade will also include the deployment of reefer racks with a 600-plug capacity and expansion of the current yard, new workshop, and a new terminal gate complex.

He said the cranes are highly sophisticated and designed to provide versatile and economical handling of containers at the terminal.

“These cranes stand for high performance, versatility, and eco-efficiency. Now, WACT Onne will maintain her superior services and match our liner customers’ quest to upgrade their vessel fleet calling East Nigeria,” he said.

Aamir Mirza, managing director of WACT, said the acquisition of additional container handling equipment is part of the company’s earlier announced expansion of the existing terminal capacity – a US$100 million investment that started last year, which will be fully in place shortly.

“The expansion plan will deliver sufficient capacity to meet the envisaged growth in East Nigeria for the next 15 plus years,” he added.

Recall that WACT made history on August 15, 2020 when it received the largest containership ever to berth at any Nigerian port. The huge container carrier named Maersk Stadelhorn, with a length overall of 300metres and a beam of 48.2metres, has the capacity to carry about 10,000 TEUs (Twenty Equivalent Units) of containers.

Maersk Stadelhorn was also the largest gearless containership ever to visit Nigeria.

WACT, which is part of the Onne Oil and Gas Free Zone, is the first greenfield container terminal built under a public-private partnership model in Nigeria. In addition to excellent hinterland connections to other parts of the country, the facility offers excellent customer service and superior e-commerce capabilities.