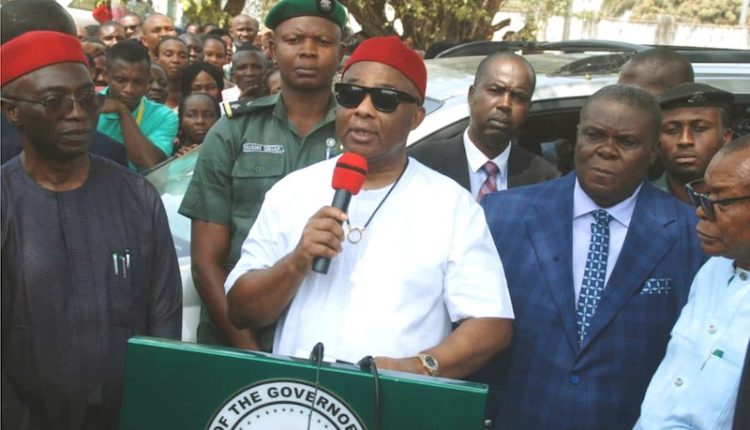 Governor of Imo State, Senator Hope Uzodinma has reiterated his resolve to reposition the Civil Service for optimal productivity.

Addressing the Civil Servants after inspecting facilities at the State Secretariat on Wednesday, the Governor harped on the need to return joy and confidence to the Civil Service.

Expressing disaffection over the deplorable state of some of the facilities at the Secretariat, Governor Uzodinma promised that water will be restored within the next few weeks; electricity reconnected to disconnected areas next month and engineers to be sent to assess damages in the buildings for immediate rehabilitation.

The Governor assured that he will make payment of salaries a priority: “I have arranged with the banks, whether FAAC comes or not on or before 25th of every month, your salaries will be paid in full. Under no condition should you be paid anything less than your 100percent salaries.”

The Governor promised that payment of the new minimum wage will soon commence as he has given marching orders to the Joint Committee on minimum wage to submit their report so that implementation can commence immediately.

While assuring the workers that their promotions will be coming as at when due, Governor Uzodinma pledged his commitment to the training and retraining of workers: “We will introduce a training programme for all cadres of the workforce, you need to update yourselves on the new digital operations which will obviously translate into greater productivity” he said.

On Housing Scheme for Civil Servants, the Governor expressed his desire to see Civil Servants retire to their own homes. He stated that the housing scheme would be decentralized into the three senatorial zones of Owerri, Orlu and Okigwe.

However, Governor Uzodinma called for change of attitude from the workers, demanded total loyalty and commitment, assuring that he has come with sincerity of purpose and will not let the people down.

Responding on behalf of the body of Permanent Secretaries and entire workforce, the Head of Service, Camilus Iwuagwu thanked the governor for taking matters concerning the Civil Service as first line charge.

Iwuagwu pledged the loyalty, devotion and commitment of the workforce to achieving the programmes of the new administration which hinge on Reconstruction, Rehabilitation and Recovery (3Rs).

Iwuagwu also assured that Civil Servants shall be of high moral value and will work hard to increase the revenue base of the state.