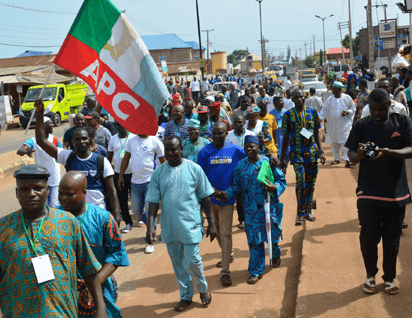 A group of concerned citizens of Rivers State has raised the alarm over alleged plot to compromise the court judgment confirming Hon. Igo Aguma as the Chairman of the All Progressives Congress (APC) in Rivers State.

The Free People’s Club and Good Leadership Initiative, in a statement signed by its President, Chima Samuel and Director of Administration, Issa Yusuf Mohammed on Saturday, said it has petitioned President of the Court of Appeal Hon. Monica Dongban-Mensem in a letter dated July 2, 2020, enjoining her not succumb to any political interest or do the bidding of any politician or his cronies.

They said the petition drew the attention of the President of the Court of Appeal of alleged boastful plan by a notable politician, to ensure Her Lordship to upturn the judgment of the Rivers state High Court delivered by Hon. Justice George Omereji in Rt. Hon. Igo Aguma v All Progressives Congress & Othrs in SUIT N0. PHC/4355/2019 in favour of the Appellant.

“We hear that the Appeal Case file was called up on Wednesday being July 1, 2020 and that in the morning Thursday of July 2, 2020, the said case file was transported by road to Abuja to be brought before Her Lordship the President of the Court of Appeal for actions.

“It is very importantly and for the better purposes of justice under the watch of Her Lordship, Hon. Justice Monica Dongban-Mensem as the President of the Court of Appeal, we, as a political watchdog are worried that the Court of Appeal in Abuja under the instructions of Her Lordship has reportedly slated Monday July 6, 2020 to entertain and possibly take far reaching decisions on the purported Appeal including but not limited to a Stay of Execution of the High Court judgment by Justice George Omereji, which may jeopardize the entire essence of the matter in favour of the Appellant.

“This is very curious and will be a dangerous precedence because our findings reveal that the Acting Chairman of the APC in Rivers state Hon. Igo Aguma has not been served any Appeal processes and he has not briefed any Lawyer to represent him in the matter,” the group said.

They, therefore, prayed that the Appeal Court President should allow the Port Harcourt Division of the Court of Appeal to freely without any interference whatsoever entertain the Appeal and do justice to it as the Law prescribes.

They said further that the NWC of the APC has issued an official letter to Rt. Hon. Igo Aguma recognizing him as the Acting Chairman of the APC in Rivers state.