…'Adelabu's ignorance of Makinde's successes not excuse for baseless criticisms'. 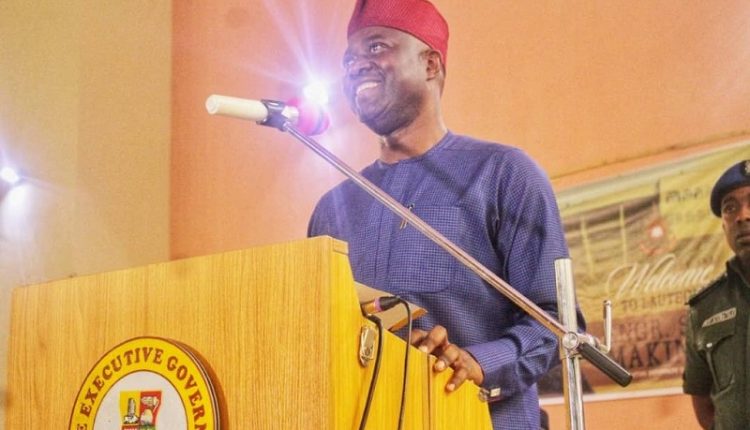 Governor Seyi Makinde has been developing the state in line with the manifesto which he campaigned with in the 2019 election cycle, his Chief Press Secretary Taiwo Adisa said on Saturday in Ibadan.

Reacting to an interview granted the governorship candidate of the All Progressives Congress (APC) in the 2019 election, Bayo Adelabu by an Ibadan-based radio station , Adisa declared that no amount of lies, misinformation and deliberate plots to malign the government by members of the opposition would make the people of the state regret electing Makinde as their governor.

Adelabu had said during the interview that the state has retrogressed under Governor Makinde in the last one year.

But According to Adisa, the governor remained committed to delivering on the mandate given to him by residents of the state, noting that the administration has been developing the state in accordance with the carefully-worded manifesto tagged Oyo State Roadmap for Accelerated Development, 2019-2023.

“The Makinde administration is sure-devotedly taking the people of Oyo State from poverty to prosperity despite intense efforts by APC chieftains to distract it,” the statement read.

The governor’s media aide added that the administration has also been transparent and open in the last one year and that this has continued to endeared it to the people, who have come to realise that indeed, good governance and probity were achievable in the state.

The statement also questioned Adelabu’s pedigree, especially his criticisms of Makinde’s handling of the COVID-19 pandemic, declaring that measures taken so far by the Oyo State Task Force on COVID-19 have been adopted even by the Presidential Task Force.

“That showcases the height of his ignorance about the workings of the state and further explains his lack of knowledge of the developmental strides of Governor Makinde’s administration in the last one year,” the statement further read.

“The people certainly made no mistakes by rejecting him in 2019 because he has shown that he has little or no esteem for the electorate. His rejection at the polls showed that the people of the Oyo State are right-thinking citizens and not ignorant lots as Adelabu will have the world believe.

“The poor and ignorant display of the governorship candidate of the APC, Adelabu on radio as part of the Oyo APC’s project to destroy Makinde’s government, has shown that the people of the state did not make any mistake in rejecting him at the polls.

“For the umpteenth time, we will like to state that no matter what Adelabu and his fellows in APC do to distract Makinde and turn the people of the state against his government, the governor will not be distracted and the people will not regret having him as their governor.

“Though no one would expect an honest assessment from someone like Adelabu, he has further demonstrated that he lacked the capacity for honesty with his submissions in the radio interview. He chose to advertise ignorance and try to sell cheap lies.

“The former CBN deputy governor lied through his nose on several policies of the Makinde administration, including the handling of the COVID-19 pandemic, the approaches to security, education and other reforms, justifying the intelligence report that the Oyo State APC has produced a document on misinformation and mendacity as the weapon to wrestle power in the state. Unfortunately for them, the people of Oyo State are wiser and can see through their lies.

“If anyone doubts the fact that Adelabu lied and is an irredeemably arrogant individual, the intervention of respected politician, Senator Olufemi Lanlehin on the programme, which put a lie to his false claims on the coalition of parties in the election, easily clears the doubts.”

Adelabu had claimed that Senator Lanlehin negotiated with him ahead of the 2019 election, which the politician immediately denied, reiterating that he had no regret working with others to elect Makinde as governor.

“But as it is our policy that whenever the APC goes low into the gutters of lies and misinformation which they relish, we would always stay high by assuring the people of the state how Governor Makinde is turning around the state for good.”

The statement further berated Adelabu for hurrying to advertise his ignorance and his obvious lack of information on governance and developments in Oyo State in the last one year, saying: “With that interview, Adelabu showed that he is not in touch with the reality in Oyo State.

“To use his own words, talk is cheap. So, reeling out falsehood on the number of isolation centres and treatment facilities put in place by the government to handle the COVID-19 pandemic as well as the efforts of the administration on prevention, sensitization and treatment of the disease amounted to cheap talk.

“He dabbled in everything, advertising his ignorance in even areas that one would have expected him to have at least a little knowledge. For instance, he claimed that the state spent N1 billion to fight the COVID-19 pandemic within two weeks without coming up with the accurate figure.

“It is sad that Adelabu could play politics with the ongoing COVID-19 pandemic by trying to downplay the amount spent on COVID-19 by the state government when there is obvious evidence to justify the government’s efforts on the handling of the pandemic.

“In a bid to attack Makinde, he stated that COVID-19 has exposed the failures of the government of the APC in the past eight years in the state, especially, the sorry state his godfather left the state’s health care system which was left in total neglect and decay during the APC years.”

“Those are comments that clearly expose his ignorance about the situation of things in Oyo State. Just a week earlier, Governor Makinde was in Oyo town where he commissioned a Primary Health Care Centre. A new model which is going round the 351 wards in the state. He had earlier commissioned another model PHC at Ehin Grammar in Ibadan. During the celebration of his first 100, the governor also commissioned a number of such PHCs. He has given commitment that the PHCs in 351 wards would be fixed in the next three years. Why then would Adelabu claim that the government had only fixed three PHCs and can only do 12 in four years?

“The governor acknowledged that yes, the Security Trust Fund wasn’t working under the APC and threatened to scrap the body but upon further appraisal, he recognised the need to inject quality hands and value and today the same body is delivering good service. That is why it was able to deliver the City Watch and State Crime Alert Platform which were commissioned by the governor last week.
“Mr. Adelabu claimed that gangsters were nowhere in Oyo during Ajimobi’s era, but he forgot to tell the world that the same Ekugbemi and co were operating freely during the tenure of his godfather as governor. He also forgot to mention that Adeoyo Hospital, Ring Road was a haven for criminals during the eight years of Ajimobi, where nurses and doctors were usually invaded by robbers and rapists. All those are things of the past today.

“Let us also tell him that the scrapped N3,000 levy has been replaced by the grants of N526 million per term for the public schools and that the same school Governing Boards are managing the funds in conjunction with the heads of schools. The fact that the free and qualitative education of the Makinde administration is working and seamlessly so is a source of anger for Adelabu and his ilk, who rejoice in milking the populace with cut throat fees and mindless capitalism.

“Adelabu sadly reeled out the names of hospitals, which he probably wrote on a piece of paper and concluded that nothing was done. He was probably still in the despondency mode that his electoral loss and subsequent losses of multi-million resources to post-election litigations pushed him to when Governor Makinde renovated Adeoyo State Hospital Ring Road and put in place a new radiology unit within the first 100 days in office.

“On the issue of insecurity, while it is true that there are challenges here and there, the interventions of the Makinde government, including the procurement of over 150 vehicles for security agencies and the establishment of the Amotekun Corps have shown capability to nip the challenges in the bud. Instead of criticizing blindly, we expected Adelabu to suggest solutions to the challenges. But in order to score cheap political points, Adelabu showed himself as someone whose honesty is already sold to the devil by lying that there were no security lapses under Ajimobi.

“With the campaign of falsehood by Adelabu today, it is clear that he, like other leaders in the Oyo State APC, have no capacity for truthfulness.”

I didn’t ask for stoppage of investigation into NIRSAL activities, says AGF