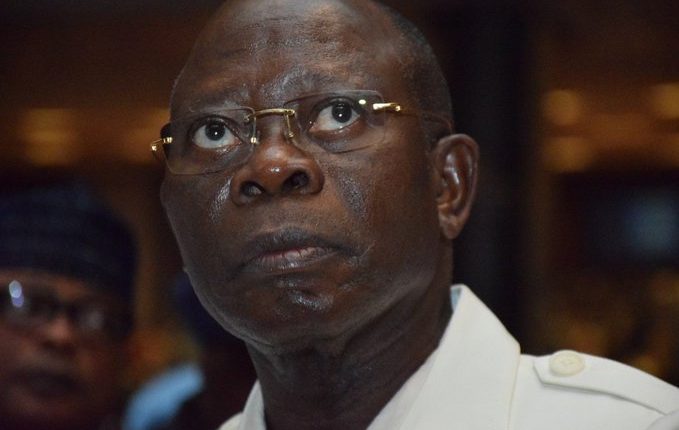 The immediate past National Chairman of the All Progressives Congress (APC), Adams Oshiomhole said he has taken a bow and accepted the dissolution of the National Working Committee (NWC) which he held by the party’s National Executive Committee (NEC).

Oshiomhole who bare his mind Saturday at a news conference in Abuja, said he has no regrets for the actions he took while serving as APC National Chairman as they were in the interest of the party.

noted that President Muhammadu Buhari had invited him two years to come and reposition APC and now that he has agreed with the dissolution of the NWC under his leadership, he (Oshiomhole) has obeyed him as the party’s leader.

The former Edo State Governor stated that he was not going to take legal action against the decision of the NEC as a demonstration of his loyalty to President Buhari, APC and Nigeria.

Oshiomhole also said he has instructed his lawyers to withdraw the case currently pending at the Supreme Court to challenge the judgement of the Appeal Court which upheld his suspension as sustaining the legal action would be tantamount to disobeying one of the decisions that the President had made.

“I thought that it is important that I formally react to the recent events as it affects our party. We are all aware that on Thursday, a special NEC meeting was called and was attended by Mr President, governors, APC leadership of the two chambers of the national assembly and some other leaders of our party.

“At the end of the meeting as you all know, the national working committee was dissolved and accordingly I cease to be the chairman of the All Progressives Congress.

“Mr President graciously invited me to run for the office of chairmanship of the party in 2018 precisely about two years ago. The president told me then that if we do not reform the APC, we can as well forget about the party.

“You know that reforms are challenging and it will entail taking difficult decisions. Mine has been a life of trouble and I accepted this and I believe I did my best. I’m happy that at the end of the day, 2019 elections have come and gone thanks to Nigerian people, our President had more votes in 2019 than we had in 2015. We have more Members in the Senate and House of Representatives.

“Unlike 2015 we were not able to manage our victory in the two chambers such that we had an APC President in the Senate and PDP Deputy Senate President. This time working hard with my colleagues in the NWC and in consultation of leaders of our party across board we have the kind of unity expected in the governing party in the two chambers of the National Assembly.

“I’m happy that the leadership of the National Assembly is working harmoniously with mr president.The APC under my Chairmanship has done its best and the results are there. Of course, we have now been dissolved and I have accepted that dissolution in good fate.

“I’m not going into the question of legality or illegality. The bottom line is that the president who invited me to lead the party and who mobilised all the support for my emergence as chairman also presided over the meeting where the NWC has now been dissolved.

“As a demonstration of my loyalty to Mr President, loyalty to our party and loyalty Nigeria nation,  I have decided to accept the decision in good faith and to maintain my loyalty, my respect and admiration of President Muhammadu Buhari”, he said.