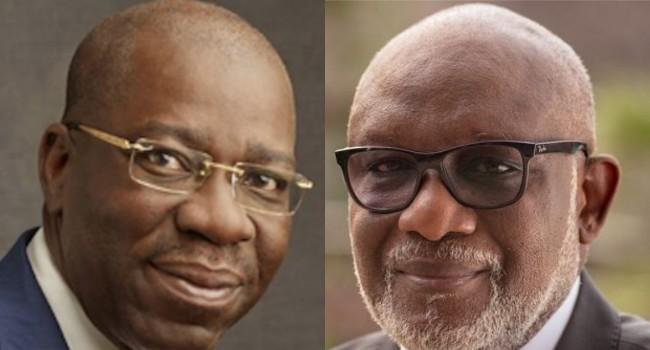 As preparation for the gubernatorial elections in Ondo and Edo State gathers momentum, political gladiators in the camps of the ruling All Progressives Congress (APC) and the main opposition, the People’s Democratic Party (PDP) in the two states have intensified alignment and realignment of forces ahead of the parties’ primaries.

The Independent National Electoral Commission (INEC) has insisted that the timetable for both gubernatorial elections slated for September 19 in Edo and Saturday 10th October, 2020 for Ondo State remain sacrosanct.

The Commission last Monday released document on the conduct of both elections in the context of the Covid-19 pandemic, saying that both elections would go ahead but voters must compulsorily use face masks.

Meanwhile, in both states the incumbent governors have indicated interest to stand for re-election. In Edo State Governor, Godwin Obaseki whose election comes first, however, appears to face an uphill task to clinch the APC ticket based on events in the state in recent time and the turmoil in the state chapter of the APC which had led to its fragmentation into two camps, with a faction loyal to the governor and the other to Adams Oshiomhole, the national chairman of the party whose relationship with Obaseki, his presumed political godson, is said to have gone sour.

The situation is said to be same in Ondo State, where Governor Rotimi Akeredolu is said to have been having a running battle with some leaders of the party both in the state and at the national level.

The crisis in Ondo APC allegedly led to the party losing the state to the opposition PDP in the 2019 presidential election, while also losing several state and federal legislative seats to the PDP.

The leaders of the APC in the state had accused Akeredolu of working for the opposition, and ahead of the party’s primary there are strong indications that these forces within the party are bent on working against him from securing the second term ticket of the broom party.

Akeredolu has on several occasions dared the leadership of the party on his ambition, boasting that APC would lose Ondo State if the ticket is not given to him.

Meanwhile, the APC has announced its intention to use the direct primary method to elect its gubernatorial candidates in both states.

The National Working Committee (NWC) of the party after a meeting recently said the direct primary option would first be used for the Edo State governorship primary slated for June 22, 2020.

A direct primary is a system where all the registered members of the party openly vote for who they want to be the flag-bearer of their party. Unlike the indirect primary, where only delegates are involved, a representative type of voting, direct method involves every registered party member like in a general election.

The APC had in 2019 general election adopted direct primaries in choosing their gubernatorial candidates in Osun and Lagos States.

Although the 2010 Electoral Act allows for either of the two processes, Nigeria’s major political parties have often opted for indirect primaries since the advent of the Fourth Republic in 1999.

It is believed that the direct method has been discovered to serve as a whip in the hands of national leaders of the party, to punish any member considered to be unyielding. A former Lagos State governor, Akinwunmi Ambode was denied a return ticket by means of direct primary method.

Indirect method used to give the incumbents the edge as they banked on the votes of all their aides, members of the cabinet, and hangers-on to populate the venue and smile home with victory. But direct method is at the instance of organizers of the primary election, who most of the time, have a pre-determined result.

In recent years, political observers have criticised the indirect method, saying that it is often easily manipulated by politicians, party leaders and delegates.

And even though the vote does not bind delegates to support a particular candidate, they are sometimes expected to align with constituency or party.

Jhon Bayeshia, a Senior Advocate of Nigeria (SAN) and political commentator, believes that the reason for the adoption of the direct primary method by the APC was to satisfy the interest of few individuals, while accusing the party of double standard.

“We saw that in Lagos State the way Akinwunmi Ambode was humiliated out of the system; so, he had to comply because he did not want to be killed. I just think it is not done with good intentions; we have seen that in recent times.”

Ayo Kusamotu, a lawyer and political analyst, however, expressed optimism in the direct primary method, saying that it was better than imposition of candidate and forcing a candidate to step down, stressing that the process could work better if the party had a strong data base of its members and good organisational structure.

“The direct primary method to me is difficult to organise than the indirect primary; the party would need to have a data base of its members across board to be able to organise such primary well. I also think it is easy to manipulate,” he said.

According to Kusamotu, “If they can keep record and have good organisational structure, it is better than imposition of candidate on the people and the party by some leaders, asking candidates to step down like we do here.”

Speaking recently, the immediate past national chairman of the APC, John Odigie-Oyegun equally raised concern about the quality and transparency of the direct primary election that will produce the candidate, saying that the primary could determine the fate of the APC.

“Transparency must start with the guidelines as to how the primary elections will be conducted. This is yet to be issued, even though dates have been announced. The nature of the primary election in Edo State will determine the shape and survival of APC as a political party. It will show Nigerians and, indeed, the world whether APC is a party of truth, change and progress, driven by the principles of fairness, social justice and equity, or if it has become a party that believes and promotes business as usual,” he said.

According to him, “Given the widely-known peculiarities of Edo State, if a consensus cannot be built behind the incumbent, everything must be done to ensure that the persons in leadership of the party at the centre who are part of the contrived crisis in Edo State must not even remotely be allowed to plan, participate or supervise; the primary should be seen even by the blind man, to be free and fair, otherwise, there would be political consequences. Allowing any member(s) of the national leadership who have been involved in the contrived crisis in Edo State would equate making such person or persons a judge or judges in their own case. This is contrary to the principle of natural justice and will be naturally resisted.”

Also recently, Odigie-Oyegun, in an advertorial published in some national newspapers said he was aware that President Muhammadu Buhari had endorsed that the two governors should be given right of first refusal.

“I also welcome most warmly the news that President Buhari has firmly endorsed the agreement reached to settle the disruptive leadership crisis at the national level that was threatening the very existence of the APC.

“The immediately relevant part of the agreement was that both Governors Godwin Nogheghase Obaseki of Edo State and Oluwarotimi Odunayo Akeredolu (SAN) of Ondo State have performed creditably and should be returned unless they do not so wish. This means that the party, in unity, should organise to support the return of both governors,” he said.

The former party chairman however, said: “Our democracy, of course, has no room for imposition; so, the party must accept and also present members that offer themselves to serve in the positions being occupied by the incumbent governors”.

Despite the decision of his party to adopt direct primary method, Obaseki has said he was confident of emerging victorious in the exercise.

He anchored his faith in divine intervention, saying that with God’s intervention, his victory as the party’s candidate was unstoppable irrespective of the method that would be used in conducting the governorship primary election.

“It doesn’t matter whether direct or indirect, I will win because I am on ground and we know what we have done; we know the amount of work we have done for our people in Edo.”

“As long as He (God) is alive, and wants me to continue, then I will. No man can stop me; power comes from God. It does not matter whether it is direct or indirect primary election, I will win,” he reiterated.