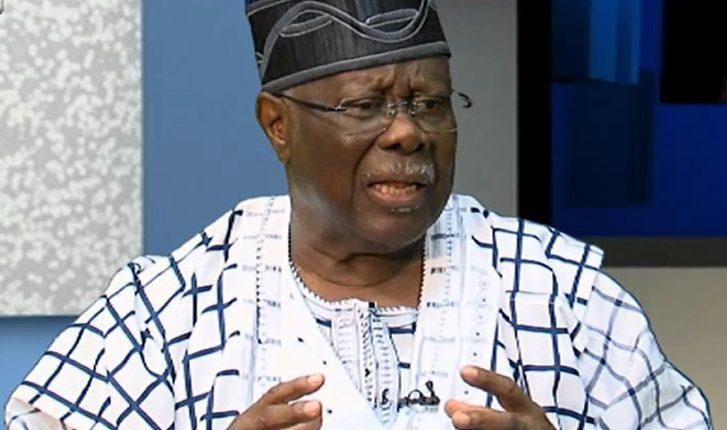 Olabode George, a former deputy national chairman of the People’s Democratic Party (PDP), in this interview with journalists speaks on the claim by some state chairmen of the party that he is eyeing the position of Uche Secondus, the national chairman of the party. He also bares his mind on the latest development in the ruling All Progressives Congress (APC). Iniobong Iwok brings the excerpts:

Chairmen of the main opposition People’s Democratic Party (PDP) in the South-West have accused Oyo State Governor Seyi Makinde of a surreptitious move to replace the party’s national chairman, Uche Secondus with you. How will you react to that claim?

It is the most senseless statement that could be ever credited to this party. The Governor of Oyo, Seyi Makinde called a meeting of elders and stakeholders where he was pleading for unity in the party and the complete lopsidedness in distribution of party positions. South-West has six states, sub-divided into three zones. Lagos/Ogun is one zone; Oyo/Osun is second zone and Ekiti/Ondo is the third zone.

There are three positions that are members of the National Working Committee (NWC). In a saner manner, each zone is supposed to take one each. During the period of Ayo Fayose as Ekiti State governor, he distributed these three positions in a manner that two positions went to one zone, and then another zone had nothing. In particular, Oyo had zero. Osun had a Deputy Publicity Secretary who is a member of National Executive Committee (NEC).

They also have the Zonal Secretary in Osun but Oyo had nothing. The number one zone which is Lagos and Ogun had Deputy National Chairman (South) which is from Ogun State. Lagos also had nothing. If these state chairmen understood the dynamics of politics, they won’t make the baseless allegations they made because the issues are very clear. We are concerned because we don’t want people outside to see the inadequacies of the managers of the party because issues like these are also important to the electorates. The culture of PDP is Justice, Unity and Progress which also means fair is fair.

What we are concerned about is how to reset the wrong done by the former Ekiti governor and balance the system. For these people to now release a statement that Governor Makinde is plotting to replace Secondus with me is the peak of indolence and lack of knowledge of the depth and culture of the party. Nothing like that was discussed at the meeting. Is it possible for only Makinde to remove Secondus and make me the National Chairman? It is so idiotic and some of them have come here to say they were wrong. They said they never knew that that was what was inside the statement but they were only given to append their signatures. I have written The Guardian newspaper to retract that publication or get themselves in trouble. Even the chairmen who issued that statement should be subjected to serious punishment because what they said was never discussed at the meeting.

Governor Nyesom Wike of Rivers made a statement last week that if care is not taken, the crisis in PDP will be far worse than that of APC. That is what elders like us are trying to avoid. The governor of Oyo who is doing everything humanly possible to reposition the party for greatness should be supported. By making that unfounded allegation, they are undermining him and me. It is a very unpatriotic comment. We know the person behind the plot .He was the one that called for the meeting where they issued that false statement. We are all concerned about resolving the lopsidedness in the party because if it continues this way, it won’t augur well for peace.

Many Nigerians believe that latest developments in the ruling APC is targeted at weakening Bola Tinubu’s political base ahead of the 2023 presidential election. What is your perspective on this?

From the very beginning, I used to tell them that the party, APC, is a congregation of strange bedfellows. When you have a big party like that and someone wants to hijack it, there will be problem. First of all, it is a misnomer in a presidential system for a man who is not elected into any position to come out and say he is the National leader of the party.

How is that possible? There is only one National leader of the party and that is the President. How can a ragamuffin from somewhere just wake up and say he is the National leader and not the President? What does that mean? We saw the way John Odigie- Oyegun was removed as national chairman. To me, what is happening to Tinubu is a judgment of God. You think you can appropriate the whole country’s resources like he did in Lagos state to your own family? It cannot work! I believe nemesis is catching up with Tinubu. We warned him but he refused to listen. The Yorubas have a saying that a child who fails to listen to corrections at home will be corrected outside. Tinubu thinks he is wiser than everyone but the breeze has blown and exposed the behind of the hen. In Yorubaland, a single person cannot be all-in-all. Tinubu thinks he can grab everything with his teeth but they have removed all his teeth.

Some of his loyalists are mounting pressure on him to pull out of the APC alliance. Do you see him doing this?

That is his decision. I can’t decide for him. He just issued a statement saying he has not told anyone that he wants to become President in 2023 and his focus now is how to alleviate the sufferings of the people. But you can see what he is doing in Lagos. What about Alpha Beta? Who is still collecting the money for Alpha Beta? Yet he said he wants to alleviate the sufferings of the people? Let him bring out all our money in Alpha Beta since year 2000 till date.

The managing director of Alpha Beta who ran away said they owed him N40billion. That money alone would have taken care of millions of poor people in Lagos today, enough of this brigandage and classic example of greed.

I have always said Tinubu will vomit everything he has stolen and the day of reckoning is here. Only Almighty God can reign yesterday, today and forever. No one else can attain that height. For me, when you start seeing the signal, if he is a very clever person, he will recall himself and have a deep introspection. If he thinks he can run Nigeria the way he did to Lagos, he is making a mistake. The local government secretariat of Ikoyi/Obalende was formerly on Glover Road in Ikoyi but he converted the place to his own and moved the local government to Obalende beside the cemetery. He made the daughter the Iyaloja of Lagos.

How can Iyaloja of Lagos be from Iragbiji? She, on her part went and locked up Computer Village, insisting that she must be paid certain amount of money. The son is the one getting all public advertisement contracts for Lagos at the moment. You need to see the son’s convoy; you will think it’s the President that is moving. For how long will this continue? We came into this world naked and we will leave naked. Nobody will leave with anything no matter how much wealth you have amassed for yourself while in existence.