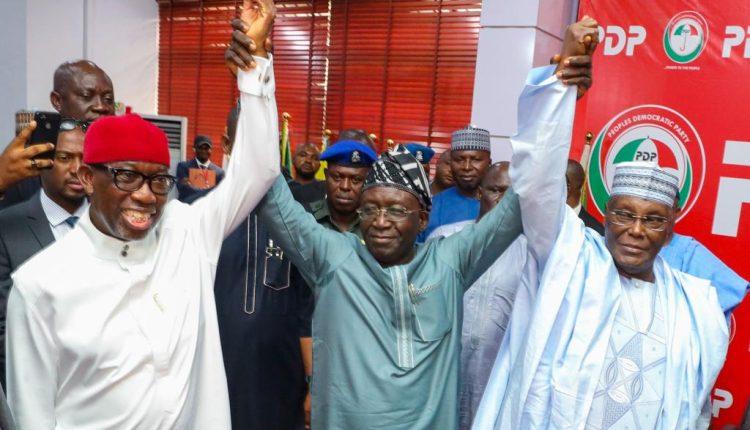 After a series of political horse-trading and intrigues, Atiku Abubakar, the presidential candidate of People’s Democratic Party (PDP), on Thursday, finally settled for Ifeanyi Okowa, Delta State governor, as his running mate.

BusinessDay findings revealed that Nyesom Wike, governor of Rivers State, was dropped at the last moment, as top officials of the party were not comfortable with his emergence.

This probably explains why most of those who witnessed Okowa’s inauguration were the anti-Wike forces, including Godwin Obaseki, governor of Edo State; Bala Mohammed, Bauchi State governor and Emmanuel Udom, Akwa Ibom governor.

Wike was earlier nominated for the job by members of the Presidential Candidate Selection Committee, headed by Umar Damagun.

The committee had unanimously adopted Wike, voting 16 to 3 in his favour, but in a twist, Atiku on Thursday announced Okowa as his running mate, to the surprise of many, including members of the committee.

Atiku had earlier written to the party to select and recommend a candidate for his adoption as his running mate.

Apart from Iyorchia Ayu, national chairman of the party, Atiku was also consulting various organs of the party, including members of the National Working Committee (NWC) and the governors’ forum.

Others include members of the National Assembly and the former governors who are to put forward their candidates.

An inside source close to the party informed BusinessDay that Atiku went for Okowa because he has a stronger capacity to attract Igbo votes to the party.

BusinessDay also gathered that “Wike created several enemies for himself” within the party, and therefore had “baggages” which may work against the party.

It was gathered that the choice of Okowa was “arrived at in the early hours of Thursday morning” after several hours of brainstorming.

Tom Ikimi, chairman of the Presidential Candidate Screening Committee, reasoned that “Okowa was picked because he is level-headed, intelligent and physically fit for the job”.

Ikimi, speaking with journalists at the party’s secretariat after Okowa’s inauguration, appealed to party stakeholders to support the team for success in 2023.

Okowa, born on July 8, 1959, is a trained medical doctor-turned-politician.

“Wike will support the party to succeed,” Okowa said in his acceptance speech, adding that Wike would have no reason to be angry over the decision.

“Governor Wike has always supported the party and Nigeria to succeed. He will have no reason to be unhappy over my emergence,” he said.

Okowa, who declared that there is “a great work that is ahead of us,” added that “by the special grace of God, we will work hard to ensure victory for the party.”

He said: “There is no doubt that there is a great work ahead of each and every one of us. The building back process is going to be collective and we’re trusting that all of our team members will want to be part of that story at the end of the day.

“The story, which will obviously be positive and will yield positive results, will require that each and every one of us must support our principle as we move forth in the next few months, and that at the end, we will win the elections with a landslide victory.

Uche Secondus, former national chairman of the party, congratulated the former Atiku and Okowa on their emergence as the presidential and vice presidential candidates of the party for the 2023 general election.

In a statement, Secondus commended the duo for the maturity they brought into the contest, which he said must have been responsible for their eventual victory.

He described Abubakar as a square peg in a square hole whose pedigree in the nation’s political space remains outstanding and speaks for itself, adding: “Atiku’s choice of Governor Okowa as his running mate says it all, as it is a good head to be around him for the gargantuan task ahead.”

“ With the picking of a running mate, the candidacy is complete and PDP is now set for the inevitable journey back to Aso Rock come 2023,” he added.