How each bloc has voted since 1999 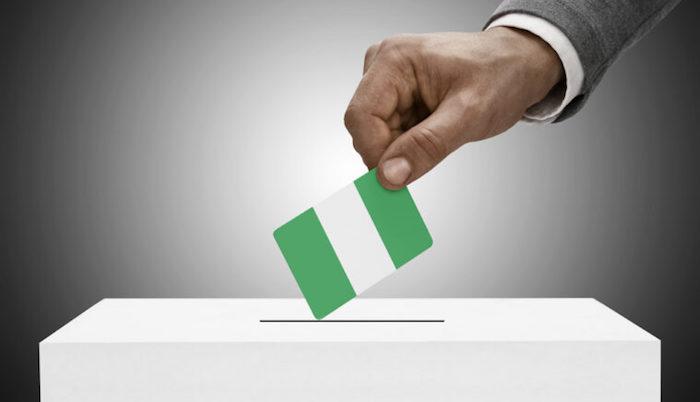 With hindsight, the Bible Belt states’ loyalty to PDP first emerged in the 1999 presidential elections, with all 17 states that form the bloc voting for the PDP’s Olusegun Obasanjo.

The Northern Alliance was also largely won by the PDP with the exception of Sokoto, Zamfara, Yobe and Osun states which were won by Olu Falae, who was running on a joint Alliance for Democracy (AD) and All People’s Party (APP) ticket.
The Rockies states were split between both parties but it was AD/APP that won in terms of total votes by a margin of 1 million.

Former president Obasanjo would eventually win the election with 18.7 million votes as against the 11.1 million votes garnered by Falae.

Ejobe told BusinessDay that the 1999 election data analysis is interesting because even though it looked like it was a PDP white-wash that year, it was purely a representation of certain trends that have already started to occur, some of which may never change.
The voting patterns were slightly altered in 2003.

The Northern Alliance at this time had begun to take shape and voted for All Nigeria Peoples Party (ANPP) whose candidate was President Muhammadu Buhari. In the previous election, the Northern Alliance had largely voted for the PDP and the 2003 election would mark the start of the PDP’s failure to win the bloc over.

The Bible Belt and Rockies went to the PDP, helping Obasanjo to a second term with 24.4 million votes, outperforming Buhari who came second with 12.7 million votes.
The 2007 election data was not broken down into state voting patterns and as such was excluded in the report presentation by Viisaus.

The 2011 election painted a picture of the established and growing Northern Alliance bloc. Again, the Northern Alliance, with the exception of Osun state, would vote for President Buhari who was representing the Congress for Progressive Change (CPC) this time. It would however be the PDP’s Goodluck Jonathan, who captured the Bible Belt (which by now were established loyalists of the PDP) and the Rockies, that would emerge 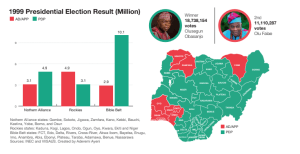 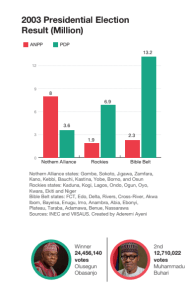 winner with an estimated 22.5 million votes, almost double of Buhari’s 12.2 million votes.
The 2015 election saw a repeat of the trend where the Northern Alliance voted for Buhari. The loyalty of the Bible Belt states to the PDP waxed stronger with victory for the PDP’s Jonathan yet again. The Rockies can be said to have been formed here as the West broke free from the Bible Belt and voted for a different party.
This time, the Rockies voted in unison with the Northern Alliance, and made history in the pro- cess. For the first time, an incumbent president was defeated with President Buhari emerging winner at the fourth time of asking.

The Rockies proved to be the game changers for Buhari who had always won the Northern Alliance since he first contested in 2003.

2015 election save for few but instrumental changes, one of which was the drastic drop in voter turnout in the Bible belt states.
Each state that forms the Northern Alliance voted against the PDP for the fifth election running but favoured the APC’s President Muhammadu Buhari. That’s in keeping with the trend since 1999 which shows that the Northern Alliance has always voted against the PDP and another trend which shows the bloc has voted for Buhari since 2003.
The Bible Belt voted for Atiku Abubakar’s People’s Democratic Party (PDP), similar to 2015 when they also voted for the PDP’s Goodluck Jonathan who 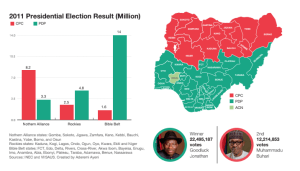 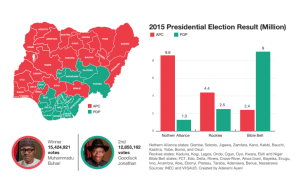 was seeking a second term against Buhari but would eventually lose out.
Seven out of the nine states that form the Rockies were won by APC in 2019, while the PDP won in Ondo and Oyo. The year before that, in 2015, eight out of nine voted for APC with the exception of Ekiti state. 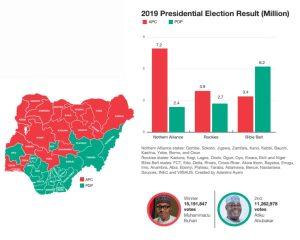