...as council's subcommittee heads meet in Ibadan ....we will give residents new lease of life-Jegede 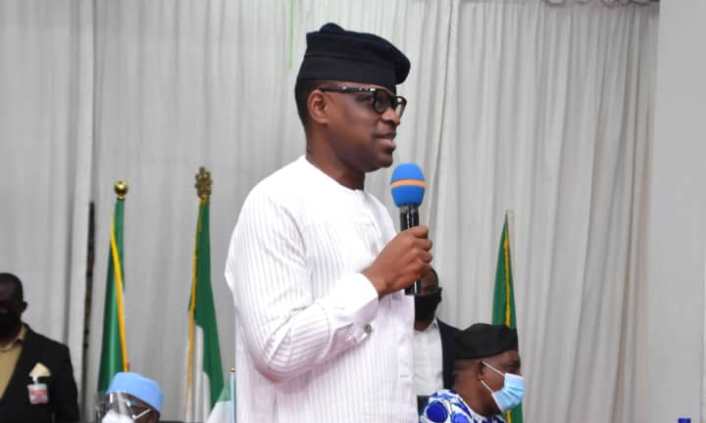 The National Campaign Council of the Peoples Democratic Party (PDP) for the October 2020 governorship election in Ondo State has declared on Saturday that the umbrella party is set to take over the state from the All Progressives Congress (APC).

The Council, under the leadership of the Oyo State governor, Seyi Makinde, stated this on Saturday, after heads of its subcommittees met in Ibadan, the Oyo State capital.

It maintained that the PDP is ready to do all that is lawful to secure victory in the forthcoming governorship election in the Sunshine state.

According to leaders of the PDP National Campaign Council, the party would put everything in place to take over Ondo State from the leadership of the APC.

Makinde, while addressing newsmen shortly after the meeting, expressed confidence that with the level of work being done by the party, victory is assured.

A statement by the Chief Press Secretary to Governor Makinde, Taiwo Adisa, indicated that Governor Makinde said: “the meeting basically is for the National Campaign Council for Ondo 2020 governorship election. These are the people in charge of the sub-committees for the council. We came here to strategise and also put our house in order.”.

The council added that there are no doubts that the PDP will win the October 10, 2020 governorship election in the state, stating that the state remains predominantly a PDP state and that the party has been working hard to reclaim the state.

The National Organising Secretary of the PDP, Col. Austin Akobundu, who was at the meeting, also expressed the confidence that the party will take over Ondo State.

“Wait for our campaign to be flagged off. We will reel out all that we need to do for Ondo people. The people here know that PDP is the next government that will take over the state and we are working very hard to make sure we get there. Our message will be clear and everybody will know.

“You will agree with me that Ondo is predominantly PDP. So, I don’t know where the doubts of winning are coming from. We are set and we are not taking anything for granted. We are working very hard and we are determined to get in there. We believe there is a lot of work to be done and we are ready for that.”

Similarly, the governorship candidate of the PDP, Eyitayo Jegede, SAN, said that the party is prepared for the election and that it has the massive support of the people of Ondo State, declaring that the party will overwhelm the APC.

He promised that the PDP government would usher in a new dawn in the state, stating that the people will experience a new lease of life in all sectors of the society.

He said: “Our people are going to experience a new lease of life. We are going to address the issues in the Education Sector. The high tuition fees imposed by the current government will be brought down when we come into government.

“The high cost of health care will also be brought down. We will provide opportunities for our youths to get employment and we will address the agriculture sector.

“There are also a lot of plans in terms of the tourism potentials of the state. We will exploit them and we will go in and see what we can do with the solid minerals. We have bitumen. We will set a deadline for us to exploit it and the people of Ondo State will be happier for it.”

Responding to questions on whether the PDP is ready for the election, Jegede said the party is “ready and good to go,” adding that “we are set for the elections. In 2016, they said the same thing that we were not set but we will overwhelm them by the grace of God this time around.

“Let me say this: what happened in 2016 will not repeat itself. We had internal conflict then but, this time around, we are unified and they have internal conflict now. The people of Ondo State have now seen the negative effect of the APC administration.”

The PDP standard-bearer warned the APC to eschew violence, noting that the masses are with the PDP and that they will take APC out of government in a free and fair election.

He said: “We will continue to work for free and fair election. We pray for it and will resist any attempt by any person to thwart the will of the people.

Disappointment, excitement as Buhari bows to pressure on service chiefs