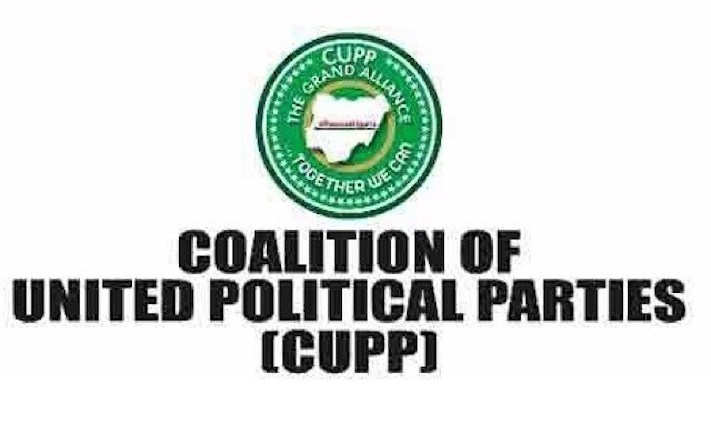 The Coalition of United Political Parties (CUPP) has accused the All Progressives Congress (APC) led Federal Government of planning to turn Nigeria into a one Party state by manipulating the outcome of the passage of the voting on the Electoral Act that sought to allow for transmission of results from polling units electronically for computation at designated Collation Centres across the country.

In a statement on Sunday signed by its Spokesperson, Mark Adebayo, CUPP noted that the manipulation of the outcome of the debate and voting on the issue of electronic transmission of election results from the polling units was deliberately facilitated by the APC government as part of its agenda to turn Nigeria into a one party state dominated by the APC despite its woeful performances in the last six years.

The CUPP said the party resort to this antics and when it is obvious it would lose the 2023 election, urging Nigerians to be watchful and reject any unconstitutional means of domination by the ruling party.

According to the statement, “The APC is desperate to hold unto power despite its unprecedented poor records on all templates of governance in the country that have plunged the country into unimaginable misery, multidimensional poverty, disunity and intractable insecurity.

“Rejection of the electronic transmission of results by the APC-dominated National Assembly is a deliberate machination to ensure mass rigging of the 2023 elections.”

The group further said: “The APC cabals know that they will be comprehensively rejected by Nigerians in 2023 who are fed up with their misrule and mismanagement of the country with unmitigated corruption, despotism and nepotism.

“They have seen the handwriting on the wall but are determined to make sure they remain in power by employing antidemocratic stratagems to remain in power and possibly turn Nigeria into a one-Party state.”

It further said: “That is the level of the unconstitutional impunity of the APC government and Nigerians must resist this attempt to hold our democracy hostage and destroy the freedom of the people to freely choose public officers they prefer in free, fair and credible elections. The Independent National Electoral Commission, INEC, has debunked their spurious claim of lack of internet penetration to enable INEC transmit results by declaring publicly that it has the capacity to electronically transmit results from any nook and cranny of Nigeria.

“Any plans to shortchange Nigerians on their constitutional and democratic rights shall fail woefully. We call on all Nigerians to remain vigilant and checkmate the politics of domination in order to silence the opposition and freedom of choice being practiced by the APC”.

Presidency: Why Nigerians should expect a shock in 2023 – Oshinowo