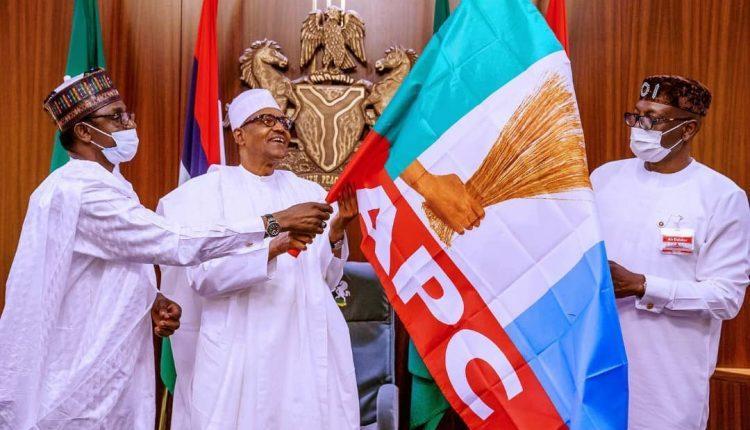 Share
President Muhammadu Buhari on Friday handed over the All Progressives Congress (APC) party flag to the party’s Edo State gubernatorial candidate, Osagie Ize-Iyamu.
The APC candidate was led to the meeting by Mai Mala Buni, Governor of Yobe and Chairman of All Progressives Congress (APC) Caretaker Committee to receive the flag at the short ceremony, symbolising his endorsement by the President.
The meeting came ahead of the Saturday’s flag off of the Edo APC gubernatorial campaigns, for the September 19th governorship election in the state.
The election is already generating tensions in the state as the party and the Peoples Democratic Party PDP struggle for the soul of Edo.
The recent defection of the incumbent Governor Godwin Obaseki has further heightened political tension in Edo as the former National Chairman of the APC Adams Oshiomhole vows to regain the state for the party.
President Muhammadu Buhari was expected to flag off the campaign, but Businessday gathered that the President was advised against being part of such a crowd on the backdrop of the current COVID-19 global pandemic
Source at the Presidential Villa revealed that the current guidelines on the COVID-19 protocols, especially as it relates to social distancing will not allow the President to be present at such event.
Businessday gathered that the meeting was used to fine tune the modus operandi for the campaign flag off that is expected to attract the national leadership of the party.
” The President may not go, but that does not mean he will not support them. He has nominated other notable party leaders like the National leader, Bola Tinubu to represent him”
The meeting at the Presidential Villa was attended by the Kano State Abdullahi Ganduje, who is also the  Chairman Edo 2020 campaign committee and the Governor of Kebbi State, Atiku Bagudu who is the Chairman of the APC Governors Forum
Speaking after the event, Chairman of the party’s Caretaker Committee, Mai Malla Buni said the flag presentation symbolizes that President Muhammadu Buhari has endorsed the governorship candidate of the party in the September 19 elections, Osagie Ize-Iyamu.
Ize-Iyamu in his remarks, debunked the allegation that 14 members-elect of the Edo State House of Assembly sat in his house on Thursday to impeach the Speaker of the House and elect new one.
He said,  “Let me debunk the statement that 17 members of the State House of Assembly sat in my sitting room, it is not true.”
He also said that there was no truth in the insinuations that President Buhari did not want to see him, alleging that it was a falsehood being spread by the opposition Peoples Democratic Party, PDP.
Also speaking, Governor Abdullahi Ganduje of Kano State described his Edo State counterpart and candidate of the PDP in the September elections, Godwin Obaseki, as a liability to the PDP.
He dismissed Obaseki as a threat to the APC, adding the the former APC Governor “ performed woefully”
“I can assure you that Governor Obaseki is a liability to the PDP. I can assure you that we are contesting against a governor who failed most woefully.”
Governor of Kebbi State, Atiku Bagudu who is the Chairman of the APC Governors Forum, assured that the party was united in support for Ize-Iyamu,s gubernatorial ambitions
“The question has been asked  whether all APC governors are in full support of our candidate and the simple answer is yes . It is laughable to suggest otherwise . Progressive Governors forum was solidly behind our party in the resolutions that was reached on June 25,that saw the emergence of the caretaker committee that saw the ratification of the candidature of  Pastor Ize – Iyamu
“We have consulted with the chairman of the caretaker committee in putting in place the campaign committee which is ably chaired by the Governor of Kano State and supported by other governors and since the candidate emerged , since the ratification, all the APC governors have been working in different ways to ensure the success of our party and let me just remind some of you ,this is not different from what we have done before .
“Four years ago we were in the same Edo state in very difficult election and we supported the incumbent governor then , Adams Oshiomole to campaign for the party which saw the emergence of Godwin Obaseki as governor, what we are doing today is not different
Share